The recent release by Authentic Music of the 'Live In The Underground' album by Replenish demonstrated just how good a gigging unit this South Coast band have become. Recorded at a concert close to their Hampshire base, it bristles with memorable hooks, anthemic choruses and thickly textured rhythms that belie the fact that Replenish are a three-piece. (Said drummer Darren Lewis, "We're rock'n'roll old school - Police are the greatest band in the world!") In the concrete caverns of Stoke's Britannia Stadium, after their excellent set at the Passion '07 event, Darren, vocalist/guitarist Ross Gill and vocalist/bass player Harun Kotch spoke about the band's present and past. We began by talking about the live album. "It was recorded at the Wedgwood Rooms, a really cool venue down south, near Portsmouth. Every now and then we like to do a local gig because we are quite busy on mainland Europe. We like to play closer to home. Recording the album with (producer) Paul Burton worked out really well."

About a third of the songs on 'Live From The Underground' are brand new but, not surprisingly considering the title, some of the material stems from Replenish's groundbreaking album of 2005, 'Underground'. Explained Ross, "We recorded 'Underground' with a great producer, Nick Fairclough, with a great budget in a great studio in South Africa. You know it was really nice to be free and not have the constraints that nearly any independent up and coming band has. So that was our first chance to really experiment and Nick kind of became our fourth member for that project. He really added a lot when he worked with us. 'Live In The Underground' is a great step forward because it really shows how we've developed as a live band over the last year or two touring around Europe. It's got a bit more energy, not better, but a step on."

The origins of Replenish are interesting. Ross had played in Seed, a Portsmouth-based rock band fronted by Ron Long, who released an EP 'What's That Noise' (that even produced a Cross Rhythms turntable hit "Mad Mad World"). But then Ross Gill, bassist Gareth Matthews and drummer Darren Lewis left Seed and with singer/guitarist Harun Kotch formed Replenish originally as a four-piece in January 2002. Replenish signed with Top Dog Promotions and were soon on the road. They also launched their own indie label Ambience Records and released two EPs, 'New Day (2000) and 'Learn To Live' (2004) and an album 'Replenish' (2003). By the time 'Learn To Live' had come out Replenish were a road-seasoned trio having done a double headline tour with Canadian band Jake and undertaken their own 30-date UK tour with support from Supervision. Ross explained about the spiritual and creative direction of Replenish. "We've never made a point of deliberately trying to sing about something, ie, there are absolutely excellent bands who are set up quite clearly for the aim of evangelism, or to hit the mainstream or to lead congregations in worship. They're all great. But we've always liked to stick with the angle of three guys just pouring our hearts out into the songs and whoever likes it, that's great."

One of the places where Replenish have found a receptive audience for their edgy, yet melodic rock, is mainland Europe. "One of the really cool things about this band I've found is that our songs can connect in any kind of place. A lot of the songs we play today we've played in an illegal rave on an industrial estate in Barcelona and the songs have gone down really well and obviously touched people where they're at. So it's really kind of interesting. It kind of confirms the type of songs that we do actually transcend those boxes people try to put you in." 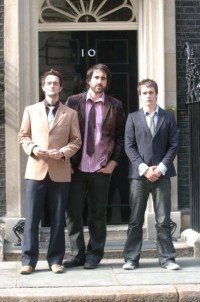 In 2004 the band went full time. Very aware that in many of their gigs Replenish are the first encounter the gig organisers or other bands or the audience have had with Christians, the band try and bring a spiritual reality in all that they do. Said Ross, "There are some very smart people in some of the places we play, like universities or colleges or youth events. They see through a phoney straight away. What we do is just try to be very real. We don't try to be anything we're not. I think even with bands or fans who are into a very alternate lifestyle, we try to just powerfully and passionately throw ourselves into [a performance] completely. We seem to be getting respect for doing something that's real because there's a lot of phoniness in the music industry wherever you go."

In 2005 Replenish released their 'Underground' album through Authentic Music. Commented Ross, "Like I say we've tried to just power forward. There was a day not that long ago where if you wanted to do a record you had to get a record deal because that was how you got into a studio. But today we have good relationships with producers and people like that. To this day we have never actually signed a full record deal or even approached a record label for one. We're trying to find our way through this and what really counts is us getting our music to people through the best means for that particular day or year. I think the main thing you've got to remember is no one will ever believe in your music as much as you, the player. Everyone else is often so focused on the people who are making the big bucks. So like I say, we just believe in it and do our best."

With 'Live In The Underground' Replenish have released an album they passionately believe in. One of the new songs on the project is "In Between". Said Ross, "'In Between' is one of those tracks and it was written on the road, in fact a couple of months on the road, in Spain. On very long journeys when you're driving in the van about six hours to Madrid and then on to Barcelona and back again you have plenty of time to think, to use some of this time, and at airports as well. There's a lot of waiting around as a band between sound checks and all that kind of stuff. With 'In Between' I remember checking out the sky and thinking about the craziness of life in general and finding gaps in between all these moments. Sometimes that's where real life is."

Darren spoke about another of the new songs, "What We Live For", on the live project. "A lot of the song is not about just throwing out all the answers. There is a great quote from one of the guys in Switchfoot saying 'a lot of people are throwing out answers when people aren't necessarily asking the questions.' 'What We Live For' is a song - not saying we believe in God, you know, and we've got it all sussed - but rather joining with humanity in the questions that we all ask. We're really just reflecting more on our experience over the years that got us to this point. The chorus revolves around what we live for is what we die for. It's a bit like where your treasure is, there is your heart. People have been able to apply that to their lives in many situations and even many people who wouldn't say they are Christians, that song has really made them think about what are their passions, what are they committing their time to, what are they living for. And that's great."

When not on the road Replenish are hard at work crafting new songs. They have a studio back in their seaside hometown of Lee-on-Solent. Said Ross, "We're just working on a new song at the moment called 'Becoming'. The main line of the chorus is, 'We are not but we're becoming,' and it's very much expressing the idea that all of us are on a journey."

In August 2006, Replenish went on a short trip to Albania where they met children and adults whose lives have been blighted by the scourge of people trafficking. Their trip, sponsored by aid agency World Vision, was the first step towards a tour in March and April this year in support of the Stop The Traffik campaign. At each of the concerts the band, and youth speaker Mark Ritchie, encouraged young people to speak out against child trafficking and the worldwide sale of people. Concert-goers were asked to add their inked handprint to the wall - 2,500 in total. On 12th July Replenish delivered this hard-to-ignore petition to 10 Downing Street. Said Ross, "We went to Albania last year with World Vision and met children who had been trafficked. Seeing the effects of trafficking with our own eyes has convinced us that human trafficking is one of the greatest evils of our time. Having been made personally aware of what a huge issue this is, we're really pleased the tour was so successful and that we were given an opportunity to bring this to the attention of the UK public and the new UK government."

Wow, I love what they stand for.

What a great attitude these guys have. Clearly God has great things for this band. More like them please, Lord!

For more on Replenish visit the Replenish artist profile