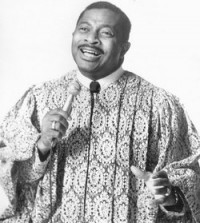 Recently mainstream record label Tompkins Square released a much praised compilation, 'I Heard The Angels Singing: Electrifying Black Gospel From The Nashboro Label 1951-1983', celebrating the rich musical heritage of one of the premier black gospel record companies. Down the years Nashville's Nashboro released singles and albums by many of the great names in post-war gospel including the Swanee Quintet, the Fairfield Four, the Consolers and even the first recordings of Candi Staton when, as a child, she was a member of the Jewel Gospel Trio. But the track which stood out on the collection as a veritable gospel classic was "Wrapped Up, Tied Up, Tangled Up" by the Reverend Cleophus Robinson.

Reviewer Lins Honeyman described it thus: "Without any time to waste, the track kicks into an infectious groove with piano on the left of the mix and a gurgling Hammond organ on the right whilst handclaps and some delightfully fluid electric guitar all serve to put Robinson's supreme tenor vocals centre stage. Cleophus delights in the fact that he is bound together with his Saviour as he throws out warnings about the Devil and the dangers of not praying. Throughout Robinson and his tight band keep the listener hooked as they bounce with effortless ease to an improvised ending that demands listen after listen."

"Wrapped Up, Tied Up, Tangled Up", recorded in 1969, went on to become Robinson's best known release though it was as a TV presenter and preacher that the larger-than-life figure was to make a major impact on the gospel music world of the '70s and '80s. Robinson was born in Canton, Mississippi on 18th March 1932, the youngest of nine children. On 9th August 1938 at St John's Church, Canton, the six year old Cleophus was converted and was soon singing with his mother, Lillie, at church each Sunday. At the age of 16 Robinson left Canton for Jackson, Mississippi, where he worked in construction during the day and restaurant kitchens during the evening until he had saved enough for the bus fare to Chicago. In the Windy City Robinson became a member of the Greater Harvest Baptist Church pastored by Rev Louis Boddie.

While visiting his uncle, Rev L A Hamlin, in Memphis, Robinson was persuaded to complete his education and after graduating from Manassas High in Memphis, went on to study drama at Le Moyne College. Keeping active, Robinson initiated a weekly radio broadcast - The Voice Of The Soul - remotely from Rev Hamblin's church. Robinson's broadcast compounded his reputation as a gospel soloist. During his final year at high school, Robinson met several touring gospel singers who, while passing through town, appeared on his gospel programme. One such gospel recording artist was Brother Joe May, an influence and later a close friend. Radio listeners from all over the south were soon sending in requests for the bluesy-voiced singer to perform "Just Over The Hill". 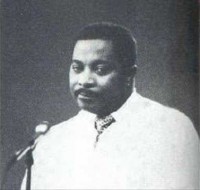 Early in 1949 Evelyn Gay of the popular Chicago group The Gay Sisters introduced Robinson to Lee Egalnick of Miracle Records, whose best known releases were with mainstream acts like Sonny Thompson and Memphis Slim. In September 1949 Robinson cut four sides for Miracle Records but neither of the 78s released sold well.

In early 1953, Robinson hitched up with the extremely talented pianist, Napoleon Brown, with whom he recorded right up to Brown's death on April 17, 1978. In June 1953, Robinson was brought to the attention of Don Robey, the wheeler dealer record company owner whose labels Duke and Peacock were already producing hits in both rhythm 'n' blues and gospel. Robinson's first session for Peacock came about in July 1953 while at Manassas High School. As vocal groups proved more lucrative in gospel than soloists in terms of sales at that time, Robey had Robinson placed with the legendary Spirit of Memphis Quartet, who had signed to the label some six months previously. 10 tracks were issued over a period of three years though none sold in appreciable quantities.

In the spring of 1956, Robinson tried to sell Robey on the idea of recording himself and his sister Josephine in a live, spontaneous church setting. Robey, knowing how well Robinson could generate excitement during a church service, readily agreed and had the couple record together that May. The result was the run-away hit, "Pray For Me". The billing on the label read "Rev. Cleophus Robinson and his sister Josephine James". Despite the success of "Pray For Me," Robinson seemed to fade from Billboard magazine's radar and was rarely mentioned again.

By February 1957, Robinson had moved from Memphis to St. Louis, married Bertha, and was installed as pastor of The Bethlehem Missionary Baptist Church at 4005 Washington Boulevard. Cleophus' compelling preaching style immediately drew attention and the congregation grew to 1,200 souls. By 1959 the singing preacher had become a popular figure on radio. Hour Of Faith went out weekly at six pm over radio station KATZ. Peacock released Cleophus' first album 'Pray For Me' which hit the stores in early 1962. Bertha's first solo outings were cut for Peacock in 1963, shortly before Cleophus contracted to Battle, a subsidiary of jazz label Riverside run by Orrin Keepnews. Robinson explained to researcher Opal Nations, "What happened was Don Robey wasn't paying me no money and when I got the deal from Battle Records, I was freelance at the time. I had been with him [Robey] for so long he just thought that I wasn't gonna seek for to better myself." It was actually Roebuck Staples of the Staple Singers, then signed to Riverside, who encouraged Keepnews to sign Robinson.

Two albums were released on Battle but a third was not released due to the sudden closure of Riverside/Battle. 1964 was a significant year for Cleophus as he started his own TV programme which in the following years was to become a major success on cable TV. Also that year Robinson's "Solemn Prayer", a bluesy sermonette, became a gospel hit and switching to New Jersey's Savoy Records he enjoyed something of a success with a gospelisation of a Marvin Gaye hit now titled "How Sweet It Is To Be Loved By God".

In 1967 the Spiritual And Gospel Festival featuring, among others, Bishop Kelsey, Sister Leena Philips Jones, the Five Blind Boys Of Mississippi and Rev Cleophus Robinson, toured Europe while back in the US Robinson enjoyed a Christmas hit on gospel radio with a rendition of "Silent Night". The following year on Palm Sunday he was the first minister to preach a sermon in its entirety at Harlem's renowned Apollo Theater.

As the '60s rolled on, gospel music began to switch its emphasis from the single to the album and a series of Cleophus Robinson 12 inches which, though not huge sellers, kept him in the record racks. 1967's 'Christmas Carols And Good Gospel'; 1968's 'The Rose Of Sharon'; and 1969's 'He Did It All' were all heard a bit on gospel radio. Right after being voted the nation's number one gospel soloist by The National Association Of TV and Radio Announcers, Robinson signed with Nashboro Records, with whom he recorded numerous albums including 1970's 'He'll Open Doors' and 'A Better Place Somewhere'; 1971's 'The Football Game Of Life' and 'Nothing But God's Word'; 1972's 'I Was In Prison'' 1974's 'Poor Boy From Mississippi'; 1976's 'Mary Don't You Weep'; and 1978's 'Live From Europe'.

Over the years, Robinson performed at many major world class venues including New York's Lincoln Center and Carnegie Hall, Cobo Hall in Detroit, Washington DC's Constitutional Hall and at the University of Jerusalem at which Robinson became the first African American artist to appear in concert. In 1992 tragedy struck when the singer/pastor's church, The Bethlehem Missionary Baptist Church, was targeted by an arsonist. However, the church was rebuilt; more albums by Cleophus were released including compilations of his old Peacock recordings and in 1993 Robinson recorded the critically acclaimed album 'The Lord Is My Light' for Savoy with the near legendary quartet The Swan Silvertones and with one of his sons playing keyboards.

Rev Cleophus Robinson Jr left behind his own musical legacy, but it was his father whose achievements were most significant. In 2002 Robinson Sr was inducted into the International Gospel Music Hall Of Fame And Museum in Detroit. In the Encyclopedia Of American Gospel Music Sherry Sherrod DuPree wrote about the singer, pastor and broadcaster's legacy: "Robinson gave a message and witness in his songs, especially 'Pray For Me' and 'Wrapped Up, Tied Up, Tangled Up'. His songs stressed that a person living for Jesus cannot get out of the tangles of Jesus."

Great article. I lived in St. Louis and watched Rev. Cleophus Robinson on TV for years, starting in the mid-70s up until his death. Wonderful performer.