Tony Cummings reports on the single "The Joy Of Jesus" by the late, great RICH MULLINS 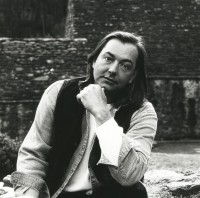 In the history of modern Christian music singer/songwriter Rich Mullins is now considered one of the all-time giants. His worship songs "Awesome God" and "Step By Step" are still sung in many churches and his albums 'Winds Of Heaven, Stuff Of Life' (1988), 'The World As Best As I Remember It Vol 1' (1991) and 'A Liturgy, A Legacy And A Ragamuffin Band' (1993) are considered classics. Rich's tragic death in a motor accident on 19th September 1997 profoundly shocked the Christian music world and since his death a tribute album, a documentary and feature film have all been released to commemorate the music and life of this most powerful of Christian artists.

Now, on the 20th anniversary of his death, three of Christian music's most gifted artists - the frontman of rockers Third Day, Mac Powell; the renowned worship leader Matt Maher; and the Americana and pop singer Ellie Holcomb - have contributed their voices to an obscure Rich Mullins recording. The release by Reunion Records of "The Joy Of Jesus (ftg Matt Maher, Mac Powell and Ellie Holcomb)" was produced by Jonathan Smith (Zach Williams, Tenth Avenue North). The song concludes with a portion of Mullins' vocal on a live recording found by his long-time publisher, Randy Cox.

Said Mac Powell, "I cannot explain in words just how much Rich Mullins and his music means to me. His songwriting has influenced me perhaps more than anyone else's. To be able to sing his lyrics and melodies in this new song helps me to remember this great writer, musician and friend." Worship man Matt Maher added his thoughts about the release of "The Joy Of Jesus", "My hope in being part of this song isn't that we just sort of have a nostalgic moment and remember a nice guy, because he wasn't just a nice guy. My hope is that people are inspired, particularly those of us who sing and write, to remember our prophetic calling to comfort the afflicted and afflict the comforted."

Reviewing the single JesusFreakHideout wrote, "There are also lyrics added. While these new lyrics, beautifully sung by Holcomb, aren't anything special, it makes for a gorgeous section of the song. The vocal performances are great, especially when all three singers join together for the climatic harmonies at the end." Holcomb spoke about the late singer/songwriter, "Rich Mullins is one of my very favourite people. His writing, his music and his demeanour have had a huge impact on me. I cannot describe what an honour it was to be part of 'The Joy Of Jesus' as we celebrate the artist and the soul that is Rich Mullins."

Thanks for the writeup, and I love this song. Mullins' 1988 album is called "Winds of Heaven, Stuff of Earth", not "Stuff of Life" by the way. Keep up the good coverage, I heard the Rich Mullins Tribute concert in Nashville last night was outstanding!