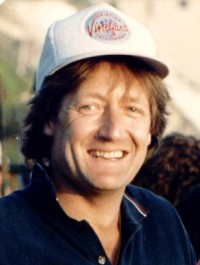 Tony: Can you give us the official Richard O'Conor Potted Biography?

Richard: Born in '51. Parents divorced in '52. Travelling round with Mum till age six (South Africa, few years in Paris, Eastern USA, Switzerland). Met friend at kindergarden in London. Mum married friend's father, an Italian sculptor and great character, Enzo Plazzotta (1921-1981). Amazing life in 60's in Chelsea, Kent, South of France, Liguria (Italy). Turned down Confirmation as couldn't say for sure that Christ was it. Left boarding school at 16 with one 'O' level. Started playing guitar, writing and singing songs. Into Beatles, Stones, Hendrix, Floyd, etc then US West Coast bands Mac, etc. Studied History of Art and Italian in Florence and History of Art and French in Paris. Arts course at the V&A. Worked for an art gallery. Joined an Estate Agency for a short spell. Moved out of home and became a full time hippy. Got into drugs, dropped out, hit the road for seven years. Worked in the 1st worlds as a dishwasher, DJ, foundry assistant, whatever, to travel in the 3rd worlds. Checked out philosophy and world religions. Was seeking the meaning, etc. Climbed mountains and volcanoes at night, watched sunsets, sunrises, got high. Returned to London disphased with dreams of being a singer/songwriter. Got deeper into drugs scene and music scene '76 -'78. Crazy times! (You don't need to know.) Heard news of lost old friend...Phillip Lawson-Johnston one desperate night. Was told he had become a "Born Again" Christian and that was all he could talk about. Immediately I knew I had to see him and did and he introduced me into the HTB of '78 and all the leaders. I was so in need and they were great. Prayed the prayer. Did long rehab. Got married '82 to the wonderful, loyal and well balanced Julia. Many teething problems to new life (Jam and Christmas Pudding factory hit the wall '83). Took over Stepfather's "Sculptural Estate" and turned studio into gallery for contemporary art and eventually just ran it part time. Heavily influenced and encouraged by "Signs and Wimbers". Amazing!? Eventually had twin boys '89. Co-founded the Kestrel Trust (ex-addict support via Church into community). Attended Holy Trinity Brompton till '87. Joined plant, St Barnabas Kensington under John Irvine (now Dean of Coventry). Went on staff part time till '96 as sound and worship coordinator, etc. All the time my songs were bottled up. Met Carolyn Stilwell, a fellow singer/songwriter, at St B's and with her encouragement formed Loose Goose. Got in touch with Martin Smith to produce the album. He brought in most of the amazing players and there was 'Break Over Me'. Never pushed the album although got distribution via Word (UK). Amazingly successful, considering. The album was and is really, really good but it somehow wasn't me although I wrote or co-wrote eight of the 11 songs. Left the partnership and made the rocky 'Traveller's Tales' in a studio in 10 days including mixing with me in control and with again excellent but different musicians. I really love that one but again never pushed it. Eventually with digital desks and great keyboards finally within financial reach out came all the rest I'd bottled up over 30 years to the present in an 18 month burst as a totally solo feat. What a huge sense of relief and now it is just a question of making sense of it all. I'm still selling and siting sculpture (check www.plazzotta.co.uk ) and I'm still just about on the worship rota at St B's and have recently got into Prison Alpha at Wormwood Scrubbs. Love it when interdenominational churches get together to 'do the stuff'. What a life! Very thankful! I am out of my depth most of the time and still heavily dependent on grace to function at all.

Tony: So you reckon that was "potted", do you? Anyway, what possessed you to release four albums simultaneously?

Richard: It was the pressure cooker effect. So much bottled up for so long. A sense of not much time left. I never had the will or courage to perform publicly and I still hate all the hype and ego that "show business" entails. I can lead worship comfortably but performance of my own stuff has always felt like showing off. Of course opening myself up to the risk, judgment and ridicule was also a fearful prospect. I guess now I have finally overcome my fear of Man and I have confidence in what God has given me. I do not want to be the guy that buried his single talent.

Tony: You are probably best known for your work on that first Loose Goose album. Looking back, what do you remember about it?

Richard: Martin Smith said this was the kind of album people made once they were established. I guess it was a bit like starting at the top without a track record and/or any publicity or renown. Mad as usual then! The album was "for God". I met and worked with some very gifted people. From a personal point of view I felt I allowed the project to get out of my control and it may be a better album for that. A handful of tracks still send a shiver down my spine.

Tony: When you are not beavering away in a studio, what other things do you do?

Richard: I guess I answered that in the first question but I must add that our boys are now just 13 and I have been and continue to be privileged to have had more input and time for and with them than most father I know. They are a big part of my healing and learning and life. It is tough being a parent but I am sure it must be as tough and often downright embarrassing having a manic neurotic for a Dad. We laugh a lot!

Tony: Come on, give us the big sell. Choose one song from each of the four albums and tell our readers why they should hear them.

Richard: This is hard because all the songs are like children to me. All different and all wonderful in the right mood. First let me explain that I have tried to make sense of all these songs by putting them onto four CDs. They are like an onion. On the outside 'Life 'n Stuff' is for the "fellow traveller". It is not overtly Christian. Then there's 'Ready Or Not!' for people at the back of the church checking the faith out for relevance. 'Between Ourselves' is to the Church as encouragement and finally 'Direct Contact' is to God personally. The four albums are a kind of "interface resource" for the Church. If I have to, favourites are: "Love Is King" ('Life 'n Stuff'); "Shepherd" ('Ready Or Not!'); "Who Shall Separate Us" ('Between Ourselves'), but the completely insane "Blessed Is He" makes me laugh every time; "Miracle" ('Direct Contact'), which works really well on a different dynamic acoustically.

Tony: If you died tomorrow (please note this is not a prophecy) and you were stood before God and he asked to hear one of your songs, what one would you sing him?

Richard: "Thank You Lord" (for being real to me).