Sandi Thom: No longer a punk rocker with flowers in her hair 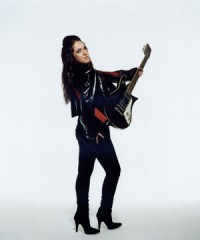 Cross Rhythms radio listeners will recognise the song "Rainbird" by Sandi Thom from the various artists charity album 'The Rose Sessions Vol 1'. But of course Sandi has already achieved major pop success with her wonderfully left field hit "I Wish I Was A Punk Rocker (With Flowers In My Hair)". The making of that particular hit has already gone down into pop music history: how the song was originally released on the small label Victory Legacy; how unable to afford a proper tour the Scottish singer she set up a series of webcasts of concerts from her bedsit billed 21 Nights From Tooting; how through word of mouth the numbers watching her performances grew from a few hundred to 92,000; how her internet success was picked up by the newspapers and through the publicity Sandi was signed to RCA Records; and how her reissued "Punk Rocker" reached number one in the national charts in June 2006.

But if that part of Sandi's life is well known, the Christian faith of the singer/songwriter has been less publicised. She spoke to Cross Rhythms about the difference faith has made in her life. "My parents were very Christian but they never forced it upon me, they allowed me to make my own decisions and for a long time I had no belief in anything. Then when I went to the Liverpool Institute of Performing Arts it was quite a dark time for me, I went through a lot of really horrible stuff. I got introduced to the Love And Joy Gospel Choir and then through the choir I got introduced to the church and then when I was 19 I made my own decision and got baptised in a church in Liverpool. It was one of the most significant moments of my life. I'm not really a regular churchgoer because of the way my life is. I'm never in the same place the same week. But I would say that I definitely have faith. It is a really important thing to me in my life though I don't run around the streets and shout it from the rooftops. It's something that's very personal to me and it's definitely the first place I look for help."

Her gospel choir period had a profound effect on Sandi. She remembered, "It was quite a difficult time of my life and I remember this one particular song we did in the choir called 'His Eye Is On The Sparrow'. It was just a lovely idea for somebody out there watching over you I guess. The song 'Rainbird' was inspired by those years I had with the gospel choir and just the idea that somebody maybe as small and as insignificant as a little bird has God watching over them."

After her runaway hit single, Sandi's debut album 'Smile. It Confuses People' made number one in the UK album charts (going on to sell over a million copies worldwide). The follow up single "What If I'm Right" was also a small hit but by the time of the release of her second album, 'The Pink & The Lily', Sandi was getting more than her far share of criticism, both from industry insiders who unjustly questioned the veracity of her obscurity-to-stardom web concerts story and from artists like Lily Allen and The Fratellis who went out of their way to vilify "I Wish I Was A Punk Rocker (With Flowers In My Hair)". Completely missing the winsome irony of the song The Automatic told the media, "If she was a punk rocker with flowers in her hair she'd get the sh*t kicked out of her by other punk rockers for having flowers in her hair." Despite her rough handling by the media, Sandi seems unfazed by her experiences. She said, "For me that was quite a long time ago. Since then we haven't had any problems - for the last year or so. It seems like everybody has had their say and really all these things have been said. I'm not cynical about the media at all, you have to deal with criticism. The most famous musicians in the world get criticised and worse. 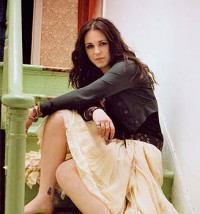 "I think it's maybe because we live in a world where stories like mine almost seem too good to be true. It's great to paint that picture and then you kind of pick it apart and I think that's unfortunately what papers are very good at. But the great thing about it is that those concerts in Tooting were the launchpad for me. It's really strange actually because I'm just leaving that flat where once we converted the basement into a studio and this studio is where I recorded the second album. My partner and I have just bought a house in Brighton and we're actually moving out and it's quite sad at the moment because I don't really know what to do with it. For me, I want to take a chunk of it out of the wall and take it with me because it was such a massive part of my life."

The first single from 'The Pink And The Lily' had an intriguing lyric. Sandi spoke about "The Devil's Beat": "There's a really old gospel song, I remember singing it back in church, in the choir. It was about dancing on the Devil. I think I subconsciously got some of my inspiration from that, bits of that were still ringing around in my head. 'The Devil's Beat' is like looking to all the other things in life, the other side of the coin, the darker side of life, the things that are going on in the world that most people, including me, choose to ignore. So I guess it was a bit of a political song. I don't really write to say it as plain as that so I suppose it's finding something poetic to say that in a nicer way and I thought 'The Devil's Beat' was rather an apt title for it."

Looking back on her second album Sandi reckons she has learnt some lessons in its recording. "I think I'm not really as much of a pop singer as some people might think. I mean, I've grown up really appreciating the kind of music that seems to join folk and soul. I see that as sitting on a fence and on one side you've got folk music and on the other side you've got soul music. And I think people like Neil Young to Joni Mitchell, Carol King - all these people managed to get that sound and I love that sound. I think that's why I've made the music that I've made. I love the voice and the singing and I loved listening to all these soul singers when I was little like Stevie Wonder, Ray Charles. My Mum has seven sisters and they were all singing and writing poetry when I was young and it was all very traditional music so I guess that had a real influence on me as well. My father is a really good singer and guitarist and he sang a lot of folky stuff too. I always find it really difficult to say what my musical style is."

Sandi begins a big tour of the UK in January. After that she will be going to the USA. She said, "I'm hopefully going to take a lot of inspiration from that journey and put it all into the third album. I really want to conceptualise this album and really go back and list the influences and I think I'm going to try and lay back a little bit. I think I want to go down a more bluesy route." 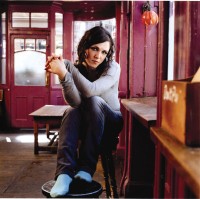 Recently a trip to Africa made a significant impact on the singer/songwriter. "I came back from Malawi and there are people working out there with people in poverty. I think it's those things you never normally see that reawaken the spirit inside of you, you remember those things that are important like your soul and your faith and the fact that these people have such great faith in God but they live in such dire poverty. Seeing that kind of thing sort of makes a major spiritual impact on you."

Ive always been slightly dubious of pop stars who on one hand proffess a true faith and with the other play the celebrity game just to get into the press. It wasnt so long ago that my daughter called me over to her computer to show me Sandi Thoms video that Sandi and her boyfriend and managment had put together for the public showing drug taking and profanitys written on t shirts supposedly showing what teenagers get up to on a saturday night, which was the name of the single Miss Thom was promoting. There was no way this could have been done by Accident and must have knowingly been put onto the internert in the hope of causing controversy and thus generate more sales. Sandi Thom may indeed have faith but she isnt above using it and other methods to get herself noticed to further her failing career.