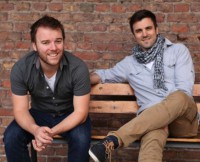 Back in 2007 Cross Rhythms were playing a haunting little worship song by Canadian singer/songwriter Sebastian Demrey. Indeed, that song, "Spring Rain", still pops up occasionally on Cross Rhythms' ministry programme Breakthrough Nights. But a lot has happened to Sebastian since 2007 and today he is half of a duo who have found considerable success in their homeland and now finding that there is a receptive international audience for acoustic orientated versions of old hymns. Sebastian Demrey and Jimmy Lahaie visited the CR HQ to talk about the unexpected trajectory their music ministry has taken.

Having once interviewed Sebastian when he was a solo, it seemed appropriate to catch up on Jimmy Lahaie's background. He said, "I was born in Canada. I'm from a region called Lac-Saint-Jean, which is about five and a half hours north of Montreal in the province Quebec. About 80 per cent of Quebec speaks French. My dad played guitar all of his life. My grandfather taught my dad, then my dad taught me when I was nine years old. He waited for me to ask him. Later my dad said to me, 'If you don't want to end up like me, playing music at my age, you have to get a certificate - just to protect yourself a little bit.' We have a school called CEGEP in Quebec; I studied music there from 17 until 19, then I did my university degree in music after that."

After his degree Jimmy's fine guitar playing landed him work as a music teacher. But it was gigging which remained Jimmy's passion. Sebastian met up with Jimmy in 2007. Sebastian remembered, "A lot of people wanted Jimmy to play electric guitars on their projects - do some rock albums and contemporary worship - but I started realising he was an amazing acoustic guitar player. He can play anything with strings on. We decided after working on an acoustic project with another artist that we should attempt to go acoustic for a collaboration."

Sebastian continued, "We felt the music connection; I think spiritually, also, when we discussed our views on faith. We come from a different spiritual journey and denomination, but when we came together it seemed to fit. We respected each other's background and views. Sometimes you realise things after; we started working together in 2007, but the Heritage journey started in 2010. We look at it now, we would have tried to plan this whole thing and I don't think we would have been able. So we've seen God's hand. In the beginning we thought, let's pause and sing the hymns we knew as kids then we'll move on to do the next project; but we never moved on. We stayed on this Heritage project, it grew and grew, and people were blessed by it."

The duo began working on the French language album 'Heritage: Cantiques & Hymnes'. Said Sebastian, "Jimmy had some of his favourites, and so did I, but we did ask people - whether in music or in our families, even two generations behind us - 'What are the hymns that had an impact on your life?' At first we were aiming at the French people, because we were involved in the French music community. Most of the people who had been singing those hymns in French don't even know that they were first written in English. They're so well-written in French it's not a translation: they're using poetry to re-write and keep the same spirit. Most of them are written in the UK, the US, some in Scandinavian countries."

'Heritage: Cantiques & Hymnes' with "The Old Rugged Cross" rendered as "Sur le mont du Calvaire" and "Nearer My God To Thee" as "Mon Dieu plus prÃ¨s de toi" took off like wildfire. Said Demrey, "When you're involved in the French music community it goes beyond Canada. Because of the Internet, we were able to network with France, Switzerland, Belgium; so it made it a bigger for us. In France, bookstores were ordering and needed more copies. We were not expecting this: we thought hymns might be a little boring for everyone. But there was a place for hymns in the French community, and it answered a need." Jimmy added, "What was amazing was that for the oldest people the hymns were memories, and for the young kids it was like brand new songs. During most of our concerts you see young people and older people, so it's all the generations together."

The combination of Sebastian's clear, expressive voice and Jimmy's superlative guitar work was a winning one and more and more invitations to perform flooded in. Sebastian said ruefully, "We were doing concerts and people would come to us and say how they were encouraged by the album. 'You guys have to do another! There are so many hymns.' We saw God's favour and we didn't want to stop there; we said, 'I think God wants us to continue.' We went on to do a second volume the year after, and then the third volume, a DVD. We tried to give as much as we could, to provide many albums for the French to encourage them. It was all about that. As far as sound goes, we're not trendy; we don't have the latest gadgets. This project from the start was an acoustic one, and we wanted to stay faithful to that, make sure the spirit of the song would always come out."

Volume two of 'Heritage: Cantiques & Hymnes' (with "Seek Ye First" sung as "Cherchez d'abord" and "Blessed Assurance" as J'ai l'assurance") was released in 2011 followed by a third volume - recorded live in concert - in 2013 with "To God Be The Glory" ("A toi la gloire") and "I Know Whom I Have Believed" ("Je sais qu'en lui j'ai la vie"). Volume three featured a version of "How Great Thou Art" ("Dieu tout puissant") with the congregation singing along. Explained Sebastian, "We just said, 'Let's take a break during the concert and sing this beautiful hymn, "How Great Thou Art", a cappella.' Jimmy's friend just put his iPhone on the table and recorded this when we were doing it. So we heard it and we said, 'Wow, this is so beautiful, so divine.' It gave us the idea, 'Everywhere we were going to go let's record it, and maybe we'll be able to do something.'"

Sebastian went on to explain how the English language 'Heritage: Hymns Of Our Faith' came about. "We were doing a concert in France, a live recording, and someone came from the UK to see us after the concert. He was very moved. 'We have so much music in the UK, but the way you approach the hymns, we would really love to have that to share with our brothers and sisters.' Our first reaction was, 'OK, that's very nice. Thank you for the compliment.' But in my head it's like, 'I don't think the UK or the US needs us. We're very much involved in the French community.' But the idea grew on us. We met some folks from English Canada, then some people from the US telling us the same thing. After a year we decided, 'We don't want to make a big thing out of it, but if it's just for those people, let's do it. Let's keep the music, because he said they like the way we do it; take some titles from all three French albums and record some English vocals.' So I was the guy who did most of the work!"

Today Sebastian and Jimmy are world travellers playing concerts singing in English or French as required. So is there another 'Heritage' album planned? Sebastian responded, "We'll see how this goes. God puts his hand on something and sometimes we take it away from him: it's God-appointed and then it becomes man-driven. From the start everything has been placed by God, and we want to make sure it remains that way. We could just surf on whatever has been happening and think we know. We hope to release a second English album. We're invited in many other countries right now - Romania, South Africa, the Netherlands want to invite us in the next coming year; hopefully we'll be back in the UK this spring. If it's God's will, we'll do a second album."