Silence The Epilogue: The US metalcore band 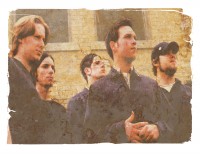 Tony: Can you give us a potted biography of the band?

William Geren: Silence The Epilogue have been playing shows all over the Midwest since 2001 and have had the opportunity to share the stage with the likes of Living Sacrifice, Shadow's Fall, Every Time I Die, The Blood Brothers, As I Lay Dying, Norma Jean and more! Our debut CD EP 'Bloodstain Pattern Analysis' was recorded and produced by Barry Poynter (Zao, Living Sacrifice, Dead To Fall) while the artwork was designed by Sean Ingram of Coalesce. Silence The Epilogue is Nick Caldwell - lead guitar, Robert Geren - guitar, Kyle C - bass, Zenas Worthington - drums, and me, William Geren, on vocals.

Tony: There are a lot of hard music bands out there now. What would you say differentiates you from other bands? How would you define your musical style?

Nick Caldwell: As far as the musical style is concerned, I believe that it is ineffable... especially from an introspective point of view. Of course it's heavy. some of the kids may say "hardcore", some may call it "metal core" and others may just call it "metal". Whatever the case may be, Silence The Epilogue is a naturally evolving entity that will continue to grow and recreate itself without following a specific genre "tag". Thus, avoiding limitations. I think that our main differentiation from other bands is due to our diverse musical influence and artistic inspirations. Each of us have a different idea of what we want to hear. and we project it in the best way that we possibly can by creating the heavy/original music that we do. We do not have to "try" to sound like anything. We do what we do and we sound how we sound.

William Geren: We feel so blessed every time we play a show, so I would say all of them have been great (minus an occasional technical difficulty or a miscommunication with our van) but if I had to pick one... In 2003 we played a show with Living Sacrifice in our home town and there was a sea of kids, so many I couldn't see them all. While we were playing there were at least two, possibly three, pits going on simultaneously. I lost my shoe and a couple of teeth in there somewhere, never to be seen again. It was amazing.

Tony: What's with the strange name? What are its origins?

William Geren: The name is like a personal Rorschach test. It means whatever you think, or need it to mean. Everyone in the band will tell you something it means to them, it is very personal to all of us.but people tend to pull their own meaning from it.

Tony: What do you think is the strongest song on your CD and what is it about?

Nick Caldwell: I would say that "Man Is A Social Animal" is the strongest song on our EP due to the straightforward feel of the overall song. The main riff itself is a favourite amongst many of our dedicated fans. The lyrical content portrays human civilization at an all-time low. Creating mass illusions, mass hysteria and mass domination. Children born of love, polluted with disinformation and tossed into the machine of materialism to regenerate the whole process over and over again.. The lyrics are very much straightforward as well.