Kelli Williams: Come in Number 6... your time is up! 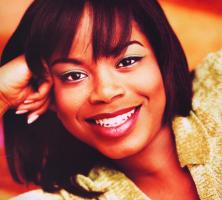 In the mid '90s Word Records were hailing a "new name on the scene," 16 year old Kelli Williams. In fact, the Nashville, Tennessee, native was hardly that. She'd been singing in a children's group The Cousins at age four and by six was performing solos in the family's church. By the time Kelli had reached 14 she'd already appeared on the Gospel Music Workshop Of American 25th Anniversary Album and, after winning a Star Search talent contest three times she was signed to Word. Her self- titled debut album was released in 1995. Her second album, 'I Get Lifted', followed in 1997 and her third album 'In The Myx' was released in July 2000. Since then, silence...

The albums demonstrate that Williams had plenty of talent and a spectacular voice. CeCe Winans took her under her wing and on tour and Williams clearly enjoyed singing the big ballads that littered her first two albums. For 'In The Myx', Tonex was recruited to produce the album and give her a radical sound that would appeal to a younger audience since it was Kelli's heart to communicate to her peers.

Changes at her record label led to the closure of Word's Gospel Division and a number of artists were dropped from the roster. Kelli Williams was one of them. Despite the disappointment at the time Kelli is upbeat about it now. "Everything has worked out for the best because I now have an opportunity to move in a new direction. I think it was a positive thing."

After the release of 'In The Myx', she kept touring for two years and then with husband Royce decided to start a family. Her pregnancy was tough and Kelli remembers, "I was on bed-rest for seven months! I actually was walking around and started having a lot of pain. I went to the doctor and the baby was ready to go and I was only four and a half months along. They actually put me on bed-rest for the rest of the pregnancy. So that was hard for me."

The aristocratically named Bentley Edward was born in May 2003 and Kelli's thoughts moved from safely producing children to producing more music. "I've been back into the studio hashing out some songs that I've written. I think that God has given me a talent for writing, so we're going to really focus on that on this next CD. I hadn't had a chance to do that before. We have a few things on the table as far as record labels are concerned. We're just trying to be careful and make the right decision. I'm not necessarily interested in a big name label. I just want to have a great relationship with people who are willing to work for me and establish an even better base as far as my audience is concerned. So that's what I'm really looking for."

Kelli now has a home studio where she has been recording demo versions of her songs over the last several months. It looks likely that the album will release early in 2005. But what is the new material like? What is she wanting to communicate? "I still want to sing to the young and the young-at-heart," she confesses. "I never really want to change that, unless I'm like 80! I'm still young and I want my focus to be on the young and the young-at-heart. Still talking about the joy of the Lord. I've learned more patience and I think that's come through being a mother and I've learned to trust God more, in my situation. Hopefully, that will come over through the music."

kelli, i love your music, I just got your album "in the myx" back from a friend, and I'm still in love with it. My favorite song by you happens to be "His Healing Hands" on your "I get lifted" album. When is your new aqlbum coming out, I have been waiting for 6 yrs!!! :-) God Bless