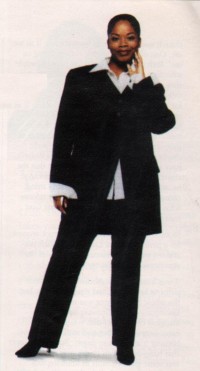 The album debut by Kelli Williams is no ordinary debut. Her voice is pure class, like a cross between Whitney Houston and Oletta Adams according to one critic while the album 'Kelli Williams' with its mixture of sassy R&B and languid ballads was made for radio land. Although this is her solo debut she's been on record before. At age 14 she appeared on the 25th anniversary album of James Cleveland's Gospel Music Workshop of American and was later on a hit album commemorating the 25th anniversary of the death of Martin Luther King.

Kelli Williams is a natural. From the first time she picked up a microphone to her first electrifying performance before a national audience, she has always known music would be a part of her life. It started early for Kelli, under the influence of her mother, Carolyn, and her father, Eddie, each talented in their own right.

"My parents have sung ever since I can remember," Kelli says. "I used to sit and listen to them rehearse all the time. I would just pick up on some things and I listened to a lot of the Hawkins Family's music growing up. I don't know why. I know most kids don't get into that stuff growing up, but I did."

Following her parent's musical footsteps, it didn't take long for Kelli to develop quite a reputation of her own. When she was just 10 years old, noted artist manager Gail Hamilton paved the way for Williams' first major appearance at the 1988 Choice Awards singing "Lift Every Voice And Sing" on the same stage as Take 6 and Larnelle Harris. "I'm still nervous when I sing, so I'm sure I was nervous back then," Kelli admits.

Williams honed her natural ability in the church where her desire to pursue a singing career intensified. Four years later, producer Sanchez Harley (who produced five songs on her debut project) sent Williams' demo tape to Star Search. One audition later, she was in Orlando, Florida, earning three consecutive victories en route to the title "teen vocalist champion". In April of last year, Kelli signed with Word Gospel for her debut-recording project. It's now out in the UK shops via Nelson Word.

Williams, now a seasoned 17-year-old veteran, developed her style while listening to the influential sounds of more traditional artists such as Tramaine Hawkins as well as a not-so-surprising list of current vocal powerhouses including CeCe Winans, Mariah Carey and Whitney Houston. "(Whitney's) audience is not just a black audience or a white audience," says Kelli. "She's singing to people across every racial line."

One of Williams' primary goals is to go beyond racial, cultural and denominational lines to reach as many people as she possibly can. While she considers much of her music to fit in the adult contemporary category, Williams hopes it is stylistically broad enough to bridge the age gap between adults and youth. Her self-titled debut contains elements of both the traditional gospel music she grew up listening to, as well as several modern urban influences. "It wasn't a conscious effort," Williams says. "I just like both of those kinds of music. So when we chose the songs, we tried to get some that were more traditional and then we wanted to have something that had more of a hip hop feel."

"Never Alone", a song that Angie Winans co-wrote and produced on the album, has become somewhat of an anthem for Kelli's ministry. "I'm into songs that encourage," says Williams. "That's why I like 'Never Alone' because even as a Christian there are those times when it's just hard to even survive. It's encouraging to know that you're never alone."

Williams has seen so many talented young people leave their church roots for stardom in the entertainment industry, but she has no such visions of grandeur. Instead, she says she simply wants to grow in her craft, both musically and spiritually. "A lot of people thank the Lord for the gift, but I think he deserves something in return, not that I could every pay him back for what he's done. I just want to bless other people, and I want to help them know Christ."