Steadfast Global Band: A British songwriter is inspired by his visits to Northern Iraq 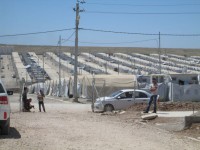 As a volunteer and trustee of Scottish charity Steadfast Global, Craig Parkes has travelled to a variety of different countries in his quest to help the organisation provide on the ground support to persecuted Christians across the globe. One location in particular has a special place in his heart. In the space of just three years, Midlands-born Craig has visited war-torn Northern Iraq no less than five times and has witnessed the hardships and heartaches of people who have lost loved ones to the invading ISIS as well as the inspirational faith possessed by many displaced believers.

Formed in 2009, Steadfast Global operates out of its Stornoway base on the Isle of Lewis off the west coast of Scotland and has reached out to Christians as far afield as Ethiopia, India and Central Asia with Iraq being added to the list in 2015. Whilst many larger humanitarian agencies have had to pull out of Northern Iraq due to lack of resources, Steadfast Global have remained committed to providing practical and spiritual support to displaced refugees in the region - at least until there is an improvement in living standards and security of the displaced.

In addition to providing help through basic medical supplies, food packages and micro-loans to affected communities plus a number of other initiatives, part of Steadfast Global's aim is to raise awareness back home about the plight of those Christians abroad who have found themselves exiled and persecuted. Whilst the charity still issues a regular newsletter to inform supporters of what's going on as well as sending out volunteers to do presentations in Scottish churches, Craig has found an unexpected musical way to highlight the work of the charity. Despite having had no previous experience of songwriting, Craig found himself coming up with lyrics and melodies during a time in Northern Iraq which, on return to Scotland, were recorded with musical friends on the album 'Songs And Poems For Iraq' - proceeds of which are going to help fund the work of Steadfast Global.

I caught up with Craig Parkes to ask him how the songs and the resultant album came about. "When I was over in Northern Iraq, I found that words for songs kept coming and I didn't know why it was happening," he explains. "I was confused because I've never been a songwriter. I mean, I'm a drummer - I don't even count as a musician! However, these lyrics started flowing and all of the songs on the album came whilst I was over there. I can't really explain it but I think that the Lord was placing these things in front of me. One night whilst I was over there, I got onto WhatsApp, tapped a beat out on the table, did my best at singing what I had and sent a couple of the songs off to a guy who I work with back home. Within four or five hours, he'd sent the songs back with some acoustic guitar and proper vocals on it. I began to think that we had something and that it might act as a little fundraiser for the work that we were doing and that's how it all started.

"I'm very careful to remember that these songs are not of ourselves - it's for the work we do," Craig continues before giving some detail as to how the album was recorded. "We don't mention our names on the inlay card - everybody wanted to be anonymous and just to do their bit which was great. The song 'Waters' - based on Psalm 69 - was performed by a girl who is a music teacher and plays keyboards in our church and she recorded it at her home because she's got quite a lot of Apple gear. 'Brothers And Sisters' was originally going to be just spoken word but the friend I mentioned earlier stayed up to three in the morning putting acoustic guitar and a vocal on it. The next morning he came round and I had my kit set up in my garage and we recorded the drums straightaway. We had seagulls on the roof, the boiler kicked in halfway through and the fridge freezer was whirling away so we had to clean up the track before sending it to a female vocalist who put some backing vocals on it. 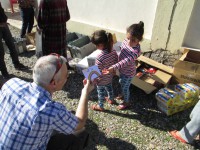 "There is a studio on the island but we just didn't have the money to record the album that way so we battled away using Audacity and any other software people had. There's a rock group on Lewis called the Broken Ravens and one of the guys from the band came along to give us hints and tips on how to use the software and we're really grateful to him for that.

"All proceeds from the album sales go straight to the work of Steadfast Global," confirms Craig. "The supporters of Steadfast - the people who get the newsletters and come along to the presentations - are the ones who have really taken the album on board and now they're able to hear what's going on over there through song. And that was another reason for making the album - to raise awareness of what we're about as a mission."

I ask Craig to give a bit of background as to how Steadfast Global came about and in particular their work in Northern Iraq. "We've been there five times," he explains. "There have always been problems in that area - especially after the American, British and French left years ago - but ISIS moved in in July 2014 and we've been going to that region since the middle of 2015.

"Steadfast Global started as a mission back in 2009 and we've got ongoing projects in the likes of India, Ethiopia and Central Asia," adds Craig. "After ISIS first went into Northern Iraq, we just felt that there was something we had to do - not for ourselves but for the people there. We had a trip planned but we didn't feel it was right at that time and we hadn't booked anything. Then another guy who does mission work from Stornoway put us in touch with an American group and that's how we first got into the country. We got an in-road through that organisation and that's what started us off and we really feel that it's where we should be."

It seems that even the simplest things have the potential to make a big difference to the lives of people affected by the atrocities, as Craig confirms. "The first time I went to the region, we did a Christmas blessing which involved giving parcels of little toys and other basic things to the different villages in the area. We asked local youth groups and Sunday schools over here to make up a Christmas card with a short and carefully-worded message that we could give out to people and that allowed us to explain who we were and where we came from." 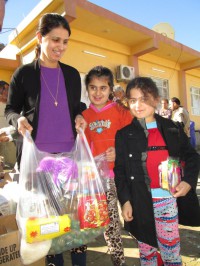 I wonder how far Craig and the Steadfast Global team were away from ISIS troops at any given time. "We're usually far enough away from ISIS," he advises. "However, at one point we were probably only about 22 miles away from them and, whilst we weren't really in danger, we were close enough for people back home to get down on their knees and pray that little bit extra. Obviously, we've spoken to the guys on the ground and it is quite desperate at the minute because the Iraqi government in Baghdad is trying to squeeze Kurdistan, where we work out of, since the independence vote back in September. They don't want the region separate from the rest of Iraq because there's a valuable oil pipe that runs through Kirkuk in Kurdistan."

Thanks to news coverage, there seems to be an overwhelming sense of hopelessness in relation to the lives of the displaced and I ask Craig if this is actually the case. "It's definitely not hopeless but it is very hard," he advises. "There's a famous picture doing the rounds of a couple of ISIS fighters standing next to a sign that said 12 kilometres to the Kurdish village of Duhok. When folks saw that photo, many of them left as they felt it was too close to ISIS. We spoke to the Christians in the area and asked them what they wanted to do. Some of them had daughters and wives but said they would stay and help. Wherever ISIS push themselves into, people end up being displaced because ISIS give strict orders about either converting to Islam, paying a tax or leaving the place in what you're wearing. These guys decided to stay and help, knowing full well that a lot of people escaping from Duhok would be moving their way. We go into villages where there are Christian, Muslim and Yazidi people living side by side. It's not desperate because the Lord is working there."

I suggest it must have initially been something of a culture shock and Craig agrees. "The first time we went, we got to the airport and there were tanks and guns. At first, it's stark but then you realise that people are getting on with their lives. There are tank tracks down the middle of the roads and people don't bat an eyelid - they're just going about their daily business doing their best for their families as we all would. Then, when you get across the Nineveh plains and you can see where ISIS have bombed and tried to get to and you see where people have been displaced and are in camps, you realise it's desperate for these people.

"There are groups of Yazidi people who have had been slaughtered with the survivors getting chased off the mountains," Craig adds. "It's so sad when you meet the family members who have been left behind. These people are doing their best and sometimes there are lots of people crammed into a small tent and it can get really hot during the day and really cold at night. These are the kind of hardships that people are facing but we generally don't really experience that kind of thing where we've been placed. You see those kinds of people still getting on with their lives on a day to day basis and the resilience is just amazing - a lot of those people will have lost wives, daughters, brothers, husbands and it's hard every day for them."

An inspiring and thought provoking article. Praying the Lord will continue to bless the work of Steadfast Global. I love the CD and would like to get a copy of the words to the songs as I don't always catch what some of the words are. Thank you for sharing these experiences.