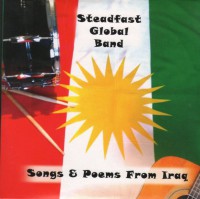 A SCOTLAND-based ministry helping persecuted Christians across the world, Steadfast Global, have released the charity album 'Songs & Poems From Iraq' by the Steadfast Global Band. Read a ministry statement, "All songs and poems on this CD were written in northern Iraq in November 2016. Music was added on returning home. Many thanks to all who helped in making this CD, you know who you are. . ."