Steve: Yes, it was funny because right when Sixpence None The Richer were first getting international attention, I was invited to speak to a group of Nashville-based music executives. What I told them was, 'This whole record industry, it's like the tax code in the US. Nobody understands it and it's built on a series of so many faulty presuppositions and shady dealings', and I said, 'All I can do at Squint is a better version of a corrupt model. What really needs to happen is something needs to come along and just chop the legs out from under this whole corrupt industry so we can start again from scratch and do something that's more artist-minded and, frankly, fair.' It was a very controversial comment because all these people were like, 'Why are you being so mean?', but then of course a year later, along comes Napster and pretty much that very thing happened. 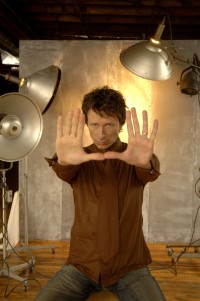 Mike: No doubt you've had people attacking you and telling you that you're doing it wrong and hurting you and I wonder how, over the years, you've managed to deal with that stuff and stay sane in the midst of it all?

Steve: Well, I never assume anybody is doing it because they just want to be nasty. I think a lot of the controversy when I was a recording artist was from generally well meaning people, but with a very narrow agenda. Since I'd grown up in a fairly conservative church, I kind of understood where they were coming from and never took it personally. In the record business nobody wants to believe they're actually ripping artists off even though that's what the record business has been doing for years. They don't really like it when somebody points that out to them and nobody wants to feel guilty or feel like they're not doing artists a service. Again it's kind of understandable why that position would not be too popular because there were so many people benefitting from a corrupt system. Understand, we did a much better version and a much more artist friendly version but it was still the record business, right, it was still founded on a very corrupt business. So we did a better job of a corrupt model. Overarching all that, God's been so good to me and so gracious I've had so many great experiences that those have always so far outweighed any kind of negative experiences or troubles or anything like that I've never felt too bad.

Mike: A lot of people won't know that you are in some ways the man behind the success of Sixpence None The Richer's "Kiss Me". You produced the record and you effectively set up the record label because you loved the band so much and wanted to give them a fair shot because they'd had such a bad time with record labels and then ironically the same thing happened again.

Steve: Well, their deal when we started their records, kind of undercover, was like a cartoon of a bad deal. It was like their record label, their indie label, went under and some lawyer ended up with the contracts and he might as well have twisted his mustache when he told them how he was going to be treating them. That was kind of like a justice mission to get this poor band out of this evil empire's clutches so when we set up this new label I was very mindful of the fact that we were going to do better by bands, and we in fact did that. Sixpence probably benefitted the most from a much better system that pays them a much higher royalty percentage and let them keep their publishing and on and on. Of course when you're doing something like that, you immediately become kind of a target with a band that gets as successful as that worldwide. . . new people come in, managers and things like that and they try to take advantage of the situation. In my case, I had just done this because I had friends and wanted to support what they were doing and wanted to give artists I believe in a platform, and the next thing you know, I'm dealing with licensing agreements in Turkey and managers telling me that they don't like the way the records are placed in stores and it just became frankly, a huge drag. I don't know if you ever saw the movie 24 Hour Party People? It was the story of Factory Records. I felt like I was watching my life on screen when I watched that movie except for all the nasty parts. I think what Wilson said was, 'I've created the perfect scenario' (because he didn't have any contracts). It's like this scenario will never allow me to sell out and so his record label collapsed instead of him ever selling out. In some ways it was the same thing. I had been so outspoken in so many things that there was no way I could become a sellout. In the end it was, at least for me, far better that Squint just kind of imploded than having to become the thing I did not like or the thing that I had tried to change.

Steve: Â£10,000 on a table? Oh, that's right! That's the famous table in Factory Records! You know, that's one thing we never did - spending a ton of money. The biggest [extravagance] was, right towards the end, I took the whole staff to New York City for the launch of a hip-hop group. That was as close as we ever got to our Â£10,000 table.

Mike: I dream that one day I will manage to hear that LA Symphony album.

Steve: I've got to tell you, out of the whole Squint experience the biggest regret, by far, I have is that the LA Symphony 'Call It What You Want' album never came out because it's just SPECTACULAR. Six tracks were produced by Will.i.am from Black Eyed Peas before they got stupid and added that chick singer. No offence but Black Eyed Peas actually used to be a really good, credible group until Fergie came in. Anyway, Will.i.am produced tracks and Mario Caldrato Jr (Beastie Boys) did a track and Prince Paul. It was just a great album. If you can ever find a bootleg or anything online, it's spectacular. It still holds up today.

Mike: I'm going to wait until it says on your Facebook status 'Steve Taylor has gone to LA' and then I'm going to come and burgle your house (chuckles) and see whether I can get it.

Steve: They are here. I just made a copy for my daughter for her iPod because if she's going to listen to hip-hop, I wanted her to start with the best.

Mike: Most people got to know Steve Taylor because of the music initially and at the time didn't realise that you'd actually come out of a background of studying films. Perhaps we shouldn't be surprised that you've moved on to becoming a filmmaker and that you're making films with about the same kind of regularity as albums, aren't you? It takes you a while.

Steve: Well, you know it's a very expensive hobby.

Mike: You did this Second Chance movie starring Michael W Smith, which is very strange casting I've got to say. That went down very well actually, didn't it?

Fascinating interview - I still love Steve's Albums, you're right about them aging a lot better than many other 20 year old albums. (though I was rather less convinced about Chagal Guevera - pity, it could have been good as well).
The combination of incisive and witty lyrics with really good inventive music is rare and refreshing. It would be great if Steve managed to produce some new tracks as good as the earlier work.

Great article. As always, Steve shows his intelligence and passion when it comes to talking about things that matter to him.
That's why he's still got such a following today, because he did things on his own terms and did them well. And, definitely, another album or two, please-even an E.P.