Steve: Yeah, it was one of those projects that defied the odds and actually turned out reasonably well. It was kind of an interesting project for Michael and potentially a risky project because his character wasn't necessarily a heroic character. There was an interesting arc in the story and it was kind of like those black and white buddy movies. Kind of a black guy and a white guy, you put them together, they don't get along and they don't want to be together and they have to figure out how to work together. In this case, Michael plays the associate pastor in a big mega church and gets sent down to an inner city church where the black pastor there doesn't want him. We did this on an independent budget and then it got picked up by Sony Pictures and got distributed into about 100 theatres across the country and then sold a lot of DVDs. It turned out reasonably well. I made some mistakes, but it's not bad.

Mike: Now you're working on another film. I can imagine there's a certain attraction to doing [a film based on the book] Blue Like Jazz. 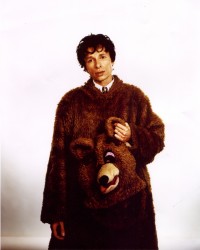 Steve: There's a scene in particular that happens at a confession booth, you know what I'm talking about?

Steve: Just to fill everybody in, the main character is at a very radical campus in Portland, Oregon. He and some friends decide to build a confession booth, but instead of taking people's confessions, they actually confess the sins of the Church, historically. It's a very moving scene and very powerful. I read this book and I thought, I want to make a movie and I want the movie to end with that scene. In the book itself, there's not much of a narrative arc, it's like a series of essays and memoirs. I went to the author and told him my idea, but I said, 'You know, the story, as is, isn't going to work. We need to make this a story about a 19 year old who lives this experience and turn it into a full on movie with a narrative arc and all that stuff'. He was really into that idea, so we've been working on the screenplay and just finished it up. I think the screenplay's really good and now we're just trying to raise the money.

Mike: Which is going to be difficult in this current climate, I would imagine?

Steve: Really? Like money is tight you say? I keep hearing about this.

Steve: It's weird to actually be able to sit across from a wealthy guy and look him in the eye and tell him in all seriousness, 'Could you be any worse off putting your money into banks or into the stock market? So movies are actually an attractive investment opportunity for you!'

Steve: Yeah, well, we'll see if anybody buys it. It's a fine art trying to separate people with money, from their money, to make a film which may or may not make money.

Mike: So the process at the moment is that you have to raise some money. This is why it takes so long to make films.

Steve: I know, like even an independent movie. Well, this is where I can learn from England, because your movies - let's take Danny Boyle, who's like one of the all time greats, and with what he's done with Trainspotting, Slumdog Millionaire (that just opened here), but even like Sunshine, and 28 Days Later, there's a guy who knows how to do a lot with not that much money and always comes up with fresh new ways to shoot things and show things. I'm still learning from the Brits, just like back in the music days.

Mike: Are you a control freak, because you seem to like writing, directing and kind of doing everything and being in control?

Fascinating interview - I still love Steve's Albums, you're right about them aging a lot better than many other 20 year old albums. (though I was rather less convinced about Chagal Guevera - pity, it could have been good as well).
The combination of incisive and witty lyrics with really good inventive music is rare and refreshing. It would be great if Steve managed to produce some new tracks as good as the earlier work.

Great article. As always, Steve shows his intelligence and passion when it comes to talking about things that matter to him.
That's why he's still got such a following today, because he did things on his own terms and did them well. And, definitely, another album or two, please-even an E.P.