Supermarket Hero: The international rock band based in Australia 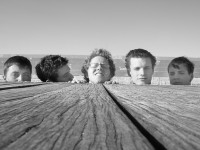 Tony: Can you give CR a potted history of the band?

Joel: SuperMarket Hero was started as a ministry of Youth With A Mission in Newcastle, Australia around 1997 to reach youth in local, national and international arenas. However, over the past year and a half, under the direction of Joel Williamson, SH has endeavored to go further than ever before in the quest to provide the message of hope that comes through Christ to youth wherever possible. In the current lineup, SH consists of Tony Overholt (USA) , Mike Sommers (USA) and Jason Mackenzie (Canada) on guitar with Andreas Karstad (Norway) on drums and Joel Williamson (USA) on bass and vocals. Still, Newcastle, Australia is home to SuperMarket Hero.

Tony: What are you aiming to do?

Joel: SuperMarket Hero has one goal, to use the tool of a band to spread the Gospel and our testimony of God to as many youth as possible. The slogan for Youth With A Mission internationally is "to know God and to make him known" and that's what we're all about. So, as we continue on the "musical journey" we're finding that almost everyday we have even more of a chance to really speak into people's lives!

Tony: How difficult are you finding it spiritually - working in the often dark world of mainstream hard music?

Joel: We love it! The best thing about SuperMarket Hero is that we're never alone. We're part of a way larger organisation that keeps us accountable as we traverse into the unknown territory of the music realm. Keeping our integrity is a mega issue for us as everyone has seen so many bands that preach God but deny him by their actions. Lastly, as I (Joel) took over the leadership of the band ministry last year, a lady in YWAM from Sydney prophesied the phrase "plundering Hell to populate Heaven" over the work of SuperMarket Hero. That excites me so much. At times it is hard, but mostly we find our music and performance to be totally accepted even as we share blatantly about God in some of the most unlikely places. We've had some of the craziest experiences where guys will claim that they felt something inside them moving as we play...that can only be God touching lives!

Tony: What are your plans for the future?

Joel: I'm so excited to see this band develop into something that begins to really "take ground" in the world's music industry and in people's lives. We've just released our EP and we're looking at doing some serious touring and really getting into the nitty gritty parts of the Australian music scene as well as possibly some other places in the world. Also, we're hoping to get a full length album out as soon as possible, especially featuring the three guitar idea that we have going on at the moment!