Susan Ashton: The Nashville CCM star wakened by the wind

She made many sit up and take notice with her performances on the Michael Card tour earlier this year. Now SUSAN ASHTON is set to visit Greenbelt. Elizabeth Leighton Jones reports. 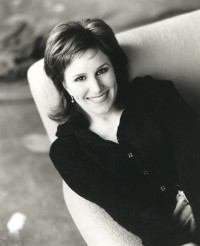 Susan Ashton's mother would say that she was singing before she could talk. Easy to believe. And once she started, she never stopped. With a grin, Susan remembers: "My friends used to tease me: 'Do you sing all the time? Don't you ever shut up?'"

The answer, of course, was an unequivocal "No!" It was "like breathing" for Susan. In fact, she was well known among her 4,000+ peers at her suburban Houston high school for just that - singing. "We would have school dances, and invariably one of my friends would go up to the band and ask if they would let me sing a song! The band members were never sure what to think, but I'd end up singing with them while my friends cheered, 'Sing it Little Red!'"

Although still crowned with the auburn tresses that birthed her nickname, Ashton doesn't have any more sceptics to convince. But the road from high school bands to Sparrow recording contracts took some interesting turns. And somewhere in between, singing took a back seat to equestrian interests.

Susan spent countless hours on horseback or lingering in the dusky afternoon stillness of a cool barn redolent with the mingled odour of leather, hay and horse. And at the ripe age of 16, if asked what her future goals were, "Little Red" would have adamantly replied, "To raise, breed and ride horses."

"When I was a little girl, I drew up plans for what my farm would look like. I got architectural paper and sketched out the house and barns, the pasture and even the dirt lanes!" laughs Susan.

"Although I loved to sing, I had no intention of ever being a professional singer...until I got saved."

In spite of her parents' church involvement, Susan and her sister Julie had staunchly refused to share their beliefs, attending the Houston-based Evangelistic Temple every Sunday only under duress. "The only reason we went to church at all was because it was a requirement. If you lived in our house, you had to go!" admits Susan. "But one night, my parents challenged us to go to the Sunday night youth group meeting. Of course my response was 'What for? No one has ever invited us to come before and we're just not interested.' and they said, 'Why don't you just go this once. If you don't like it, you don't ever have to go again.'"

Reluctantly, the girls attended and after a remarkably uninteresting evening, vowed never to go again. However, God in His inimitable way intervened and life would never be the same for Susan Ashton. After school the following afternoon, Susan received a phone call from one of the youth group members. Susan still recalls her amazement, "It blew me away that someone had actually noticed us and not only that, but that they took the extra time and effort to call us and let us know how glad they were that we came."

It didn't take a second invitation. Susan went back and began to immerse herself in the programme and five weeks after her first visit, gave her heart to the Lord. Immediately, she knew that horses would have to take a back seat - she wanted to sing for the Lord.

After graduating, Susan steadily gained a reputation as an outstandingly talented session signer while tending to a day job as a receptionist for an oil and gas consulting firm. "Then I met Wayne Watson and the next spring I did the duet with him on Watercolor Ponies which led to work on a Dallas Holm album in Nashville."

The engineer on that project urged Susan to put three songs on a demo tape, which he then gave to Sparrow A&R VP Peter York. York was so enthralled with the tape that he completely convinced label chief Billy Ray Hearn, who offered Susan a contract solely on the strength of York's recommendation. In February 1989, Susan moved to Nashville to begin work on her debut album. As it turned out, her versatile vocal styling was as much a "curse" as a blessing, in terms of settling on a musical direction. Ace songwriter and producer Wayne Kirkpatrick was the choice to handle production duties, and the result is 'Wakened By The Wind', a solid acoustic pop effort just released.

But was it worth giving up the horses? "Little Red" thinks so. "It's so unbelievable - God opened every door for me to sing. It's more than I ever dreamed it would be."

The opinions expressed in this article are not necessarily those held by Cross Rhythms. Any expressed views were accurate at the time of publishing but may or may not reflect the views of the individuals concerned at a later date.
About Elizabeth Leighton Jones
Elizabeth Leighton Jones is an American journalist writing for various US publications.