Sweet Honey In The Rock: The female acappella music group based in the US

Even before Take 6, Glad, Acapella et al came on the scene, an African American team known as SWEET HONEY IN THE ROCK were singing without a band. George Luke spoke to the group's founder Bernice Johnson Reagon. 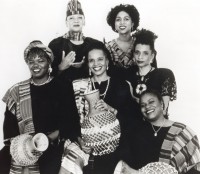 Sweet Honey In The Rock

They're acknowledged worldwide for their acapella pyrotechnics. They've played the world's concert halls since 1974 and made an appearance at Greenbelt in 1989. They're known for their radical politics and feminism while their leader Bernice Johnson Reagon has written an important academic work on the history of gospel music. They have been singing for 20 years, during which time they have released 11 albums and had a total of 21 ladies join and leave their ranks. During the Easter holiday, they performed to a sell-out crowd at the Queen Elizabeth Hall in London, one of over 60 stops on their yearlong, worldwide 20th anniversary tour. The following Monday, I managed to drag myself away from the telly and the few remaining eggs and hot cross buns and went to the Marriott Hotel in Swiss Cottage, where Bernice Johnson Reagon, the founder and musical director of the group, and Carol Maillard, the only other original member still with the group, talked me through the last 20 years.

Sweet Honey In The Rock started life in 1973, a product of Bernice's work with a drama group while she was a student at Howard University, as well as a member of the Civil Rights Movement. She had learned to sing in the Baptist Church where her father, the Rev Jessie Johnson, was a minister and found that the songs were as relevant in the Civil Rights context as they were in the church. "They were structured so I could easily turn them into freedom songs," Bernice explains. "While I was working on my doctorate at Howard, I became vocal director of a Black Theatre. Some of the people in my workshop said that the songs I was teaching them were too good to only show up in plays - they should be on a concert stage - and that I should start a singing group."

About 10 people showed up for the first rehearsal Bernice called - both male and female -and she chose the title of the very first song she taught them to be the group's name. "After the rehearsal, I called my father and asked him about the song and its meaning," Bernice explains. "He told me that it was based on a religious parable that described a land so rich that when you cracked the rocks, honey would flow from them." However, there were a few problems at the beginning. For a start, a different set of people would turn up at each rehearsal. To add to that, Bernice herself was unsure of the direction the group was to go in, as it had not been her idea to begin with. After several months of trying unsuccessfully to get the group going, she gave up. She continues: "One member who had been egging me on came up to me during the summer and said, That was a good idea - you should do it again!' I was a little angry, but I put up a notice announcing another practise session. This was in September. On the day, only three people turned up - a long way from eight to 10 - and I thought, This is really the pits.' But I started the rehearsal on time. It's hard to describe how tight the sound was. No matter what song I called, it sounded great. After a while, we stopped and I said, 'Well, I guess this is Sweet Honey In The Rock.' Our first concert was at Howard University on the 23rd November, 1973."

In the group's early days, they found a firm following from among America's young but growing feminist movement, who were fascinated by this group of black women who sang such progressive songs. They also continued to be very active supporters of various black causes, which also brought about some important milestones in the group's history. "One important event for me was performing in Little Rock, Arkansas, in the first High School to be racially integrated," says Bernice. "Daisy Bates, the former head of the NAACP (National Association for the Advancement of Coloured People), was there in the front row, and it was a very powerful moment. Another important time was a tour of five African countries - Uganda, Namibia, Mozambique, Swaziland and Zimbabwe - in 1989. When we got back, we had a call from Harry Belefonte, who told us that Nelson Mandela was soon to be released, and asked if we would sing at the rallies when he visited the US."

Carol's fondest memory is of the group's 10th anniversary concert. "I wasn't singing at the time, as I had just had my baby, but Bernice got me on stage with the baby in my arms and I sang with them. All the women who had been members of the group at one time or the other were there - some of them I didn't even know."

Both Bernice and Carol say they had no idea how long the group would last, and Bernice admitted that she always found it hard to come to terms with a member leaving. "It was only at our seventh anniversary concert that I thought, 'My God, maybe there's something here.' What's really been important for this group is the response from the audience, because since it wasn't my idea that this would work, I wasn't sure how it would be received."

The current line up of Sweet Honey comprises of Bernice, Carol, Ysaye Maria Barnwell, Nitanju Bolade Casel and Aisha Kahlil. A sixth member, Shirley Childress Johnson, does not sing but interprets their song lyrics into sign language for the deaf. They all have other professions apart from their music; Carol is an actress, Aisha teaches singing and dance and is co-director of First World Productions with her sister Nitanju, Ysaye is a speech therapist, community worker and actress, Shirley is a professional Sign Language interpreter and Bernice is a historian who does a lot of work with the Smithsonian Institution in Washington. They usually only perform at weekends, but take a few months off in the year to go on tour and record an album every other year.

The group's repertoire is very diverse, featuring not only the gospel songs and spirituals that they are famous for, but also love songs, blues songs, African chants and even some rapping. They have also recorded two children's albums. "This is a time when strong musicians don't just want to write about one thing, or sing just one kind of song," explains Bernice. "Sweet Honey is the kind of group which says that human beings aren't simple - we're complex." Their variety has in the past caused them some trouble with America's radio programmers and the music industry over there in general. "People are always asking us where they can find our records," says Bernice. "We say, look in the gospel bin, in women's music, in singing groups and you might find us. Now we have a category -Billboard now has a 'World Music' chart, and our latest album 'Still On The Journey' is Number Two. It's taken a long time for the organised music industry to develop to the place where they can handle the group."

1994 looks like being a very busy year for Sweet Honey. Apart from completing their tour, they have a number of other projects in the pipeline, including some TV work with Oprah Winfrey. Their second children's album, 'I Got Shoes (Music For Little People)' is due for imminent release and a book about the group, 'We Who Believe In Freedom', will also be published. And the next 20 years? Bernice's answer is simple: "I'm not a prophet!"

The opinions expressed in this article are not necessarily those held by Cross Rhythms. Any expressed views were accurate at the time of publishing but may or may not reflect the views of the individuals concerned at a later date.
About George Luke
George Luke is a London-based journo who's been writing for Cross Rhythms since CR16 (when we called him George Duke).