CCM buffs journeying to the Cross Rhythms Roots And Branches fest in Dudley this year are well advised to wear flares and platform shoes. For US band SWEET JAZZ POPEYE will be there offering...gulp...Disco Praise. 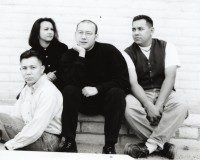 Disco must surely be one of the naffest forms of music ever thrust upon the record buying public. For many the memory of that time in the late '70s brings an inward cringe at the thought of the fashions, fads and sad music. Bad disco music must be the worst music of all and there was plenty around! At best, disco can be enjoyed with a wry smile and tongue planted firmly in cheek. Generally, Christian music has nearly completely avoided embracing disco...until now!

One of the most interesting and perhaps humourous music projects to be released this year is Disco Praise. The very concept might be enough to strike fear into your heart because of disco's associations and yet you'd be missing a treat. The band who recorded it, New Mexico's Sweet Jazz Popeye love dance music. So for their debut album they chose to discofy a few chosen songs and throw in every '70s disco cliche they could find!

They're excited about their planned visit to Britain in September for the Cross Rhythms Roots And Branches festival, so a phone call to the band is in order to investigate further. I spoke to producer John Padilla who explained that the band are not one family but two brothers and their cousins. He described how the band formed, "We come from a very musical family. Our parents have been singing in gospel groups since we were very little. We grew up with our parents practising and rehearsing in our living rooms. So that's what we knew when we grew up. One day we came together and said we should be doing something together so we got together for a jam session and it kind of clicked. It really hit. Maybe it's a family thing. We've been together eight or nine years off and on. We started off really young just playing a new wave sound. We loved that kind of music, we had a real European influence. We took some time off and when we came back our musical influences had changed so much and in some ways matured so that we came out with a more disco or house sound."

John Padilla continued to tell me about the band's musical influences, "I remember going to school dances in fifth grade where they were playing a lot of Chic and a lot of Abba and that took root. We grew up in the "70s and that's where our musical taste developed." But isn't it all just a bit cheesy? "To say the least," he laughed. "Yes!"

Isn't there a problem with making worship music in a cheesy style? Isn't it a little offensive? "When it first came out." John countered, "bands like Prodigal and Sweet Comfort Band were doing it at the time it was popular. At that time it was probably taboo and inappropriate but in this day there are so many different kinds of music. When you've got thrash metal and rap and this type of Christian music, disco is nothing compared to most of that stuff so it just kind of fits in. It's kind of tongue in cheek stuff that we do so it's not really offending to anybody."

He continued to explain the band's philosophy, "It's just all fun. Thinking back to when disco had come out dancing in the Church with Christian music just didn't happen but now I think dance and any kind of dance music is an excellent tool for ministry to draw people to the Lord and that's what we're after. We love to dance and we love to tell people about Jesus so that's kind of natural."

One of the most interesting songs on the album is Sweet Jazz Popeye's disco interpretation of DC Talk's "Jesus Freak". A brave move? "This song was a blast!" Padilla commented. "When we first signed with Myx Records our producer had the original concept for the album. He approached us at the Cornerstone festival and we hadn't signed to any label. He said, 'Would you guys like to do an album called "Disco Praise" where you take some old tunes and put them in your disco style and try to market it that way?' We thought that would be cool and he gave us some tunes but one tune that Eloy, our singer, had been experimenting with was DC Talk's 'Jesus Freak'. Over here the song is huge! It's amazing! We took that song and were sitting around one day and it just seemed so natural, Chic's 'Le Freak' and 'Jesus Freak'. We wanted to call the song 'Jesus Freak Out' but couldn't because of copyright things. We had a lot of fun doing this and getting the samples right. You notice there's a rapper on it who's not like the rapper from DC Talk! It's a female rapper and she happens to be in the family also - it's my sister
Janice.

She got in the studio with us and boy that was a lot of fun to see her doing that!"

Having played the track to friends and colleagues, it seems that it evokes very strong reactions. As a joke I asked John how soon after releasing the album did the death threats start from DC Talk and their fans? "We haven't heard anything back from Toby, Kevin and the guys." John continued, "You have your loyal DC Talk fans who are going to hate, of course, anything you do to this song but you've just got to take this song in light because it's just a lot of fun. There are some fans who just love this. When they started playing it on the radio station here in Albuquerque we had a lot of people who called up and told the radio station they wanted to hear more of it but others phoned up and said, 'How can you butcher this song?'!"

Whether you think the album is a great fun disco pastiche with a sense of humour or the biggest heap of dung you've every listened to, the band had clear ideas about what they were trying to achieve. John explained their approach in the studio, "What we were doing was taking old tunes and trying to make them as cheesy disco as they could possibly be! We had this idea in our minds of what disco was supposed to be so we tried to use every little cliche of disco that you found in the '70s on this album. I don't think we left anything out! The style of Chic was what we were totally into -the grooving bass lines and a dancy style."

Even their name has a wackiness about it. John explained how the band became Sweet Jazz Popeye, "When we first signed our name was EML which means absolutely nothing but was very similar to another band on the label EDL. We searched around for another name and one night our singer Eloy had a dream and I don't know what sort of pizza he'd been eating but in the dream there was this gold record and on the gold record was the name Sweet Jazz Popeye and when he woke up he was astonished and searched the Scriptures to find revelation!" John chuckled and continued, "Not coming up with anything he decided he must have heard the name somewhere before so he ran to the record store to see if he could find it. Nothing came up under that name. He came back to us and told us about the dream and we pretty much laughed him out of the house. It was mainly a big joke."

However, that joke took on a new shape when they met up with Joey Belville from The Echoing Green. A couple of the members of the band persuaded Joey to play a joke on Eloy and tell him that he'd had a dream and the band had to be called Sweet Jazz Popeye. For a split second Eloy wondered whether it was a sign from God! Clearly you have to possess a sense of humour to be in this band! Whatever, they became Sweet Jazz Popeye and basically the whole thing's a cheesy joke, right? "Yes, of course," responded John.

"Can you really take it seriously?"

I wondered whether there might be a problem with an album that is supposed to be worship but adopts a humorous style of music and approach. Isn't the title "Disco Praise' a bit of a misnomer? John responded, "I think so. You expect to hear praise and worship songs done in a disco style but when you think about it, what we're really doing is praising the Lord and if it's in a disco style then it's disco praise."

I confessed to John that I'm not really convinced and we explored the issues further. Isn't there a problem with making flippant music and then attaching worship to it? He became serious, "I think that when we are talking about disco praise, it's not talking about disco worship in the way that reggae worship was done by Christafari or 'Nitro Praise' and these kinds of albums that come out which are basically praise and worship. What we are trying to do is say we can praise God through this music whether it's house or disco or techno, it doesn't matter: we're praising God."

I still felt like a dog with a bone as I continued to explore. The difference between 'Disco Praise' and other worship albums is that the music of 'Disco Praise' isn't serious. Can John see that this might be a problem? "I don't think so. I think our God is fun and that our God is one of humour! Heck, he created me! There are millions of ways of praising God and praising God is something which is fun. We can be tongue in cheek with him, it's not all formal, it's not all doing hymns in church all stuffy with a tie every Sunday. That's not what it's all about. I think we can have fun in Christ and our band is a lot about that. When people come to the shows, they have fun in the Lord and it's not the same kind of fun that's out in the world. I think in the light of that, humour is the Lord's. So why not?"

The message is that Sweet Jazz Popeye have Fun in the Son and their tongue in cheek music will appeal to you, if you can get the joke! Since we're living in days when plenty of churches are adopting alternative styles of worship, why can't disco have its day? If we rave in the nave, use techno tracks or ambient sounds, the music of Sweet Jazz Popeye has a validity and a sense of humour which will appeal to some who want to escape from formality.

The best way is to judge for yourself when Sweet Jazz Popeye play at Dudley in September. Flares, Afro wigs and medallions won't be obligatory, just an open mind, a heart to enjoy God and a desire, as Chic used to sing, to dance, dance, dance. Yowsa! I'll see you there!