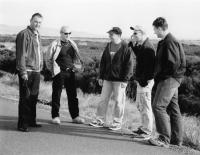 Last year I put out a CD called 'Unique World', some of the band played on the album and joined me in doing some gigs to promote it. This year we felt it a natural progression to become a proper band; this is no longer Scott Nicol plus backing musicians, this is Ten Miles Tall.

Who plays what in the band and how would you describe what you are doing musically?

Gareth Dunn plays bass and is also a competent guitarist and a bit of a technical genius. Alan Divers is our lead guitarist, sings backing vocals and is also a songwriter and artist who did some marvellous work on the album cover. Grant Spence plays keyboard and Hammond organ, he is also a good guitarist and sings backing vocals. Paul Green is our drummer and also a bit of a comedian. I am the main vocalist, songwriter and guitarist. Musically we are trying to produce quality Christian music that ministers Jesus but lyrically can be embraced by both the secular and Christian markets. Our sound is a mixture of new country/folk rock relevent to today's music scene with other dashes of influence from the rock world thrown in.

Why the name Ten Miles Tall?

The name itself doesn't have a specific meaning, but it makes me think of confidence and strength.

What kind of gigs are you be playing?

We are playing in an Elim Church concert and the Carberry festival near Edinburgh, the Edinburgh festival and Cross Rhythms In:Fusion festival in Ireland all in late July/August, so we are quite busy at the moment. We are also involved with 2 b This Generation which is a youth event based at the SECC in Glasgow.

What's the real crowd pleaser in your live set?

There are probably two or three which could fill that description but I will say "Like You" which is kind of funky and can get the crowd really involved.