With his single "Any Way (You Bless Me)" much played on Britain's RSCB radio and a stonking album debut, TERRY GARMAN is more than your average pastor. He spoke to George Luke. 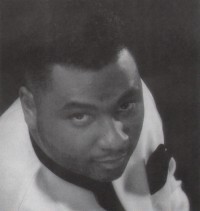 During the latter half of 1995 a singing pastor from Michael Jackson's home town of Gary, Indiana, found himself and his music embraced by scores of British R&B fans (regardless of their religious leanings), whilst remaining virtually unknown in his own backyard. Terry Garmon, the voice behind the R&B radio hit single "Any Way (You Bless Me)", made a brief visit to Britain during the winter and when not pinching himself to make sure he wasn't dreaming, he did find time to tell us a bit about himself.

As is the case with most of the best R&B acts, Terry's musical background is from the church (both his father and grandfather were ministers). "I think I got most of my musical education from the R&B world, listening to a lot of the 70's funk type of stuff," Terry recalls, "and my parents listened to a lot of Donny Hathaway and Roberta Flack, so that had a great influence on me. Generally, I believe that all those things worked together to compile what I'm doing today and I kinda describe it as 'gospel with an attitude', because it's not just traditional gospel it is the word of God put to a very contemporary, very upbeat R&B style of music. I think it's a style that reaches the youth, who really need the Lord most in these last and evil days."

Terry started singing in his granddad's church at the age of five. As he grew up, he learned to play keyboards and drums, directed the church choir and while in high school formed an R&B group which gigged intensively on the club circuit. He eventually settled in Minneapolis, where he did a stint at Paisley Park, creative headquarters of the artist formerly known as sane...oops, I mean Prince. "He was just as strange then as he is now!" recalls Terry. "I never actually got a chance to work with him, let alone meet him on a personal level, but I worked in the camp with people like Sheila E and a few others of the staples of Minneapolis - the people who were responsible for the Minneapolis Sound. I got a lot of my musical education from them. I learned a lot of studio techniques - I basically learned to be a producer and how to really be a writer from that experience. I took from working with them and I came back to Indiana and started my own studio and production company. The experience I gained from them really helped in what I'm doing now, because it made me more rounded as a writer and producer."

The studio set up in Gary was a joint venture between himself and his close friend, producer Robert Lewis. Their production skills brought great material rewards - but also a lot of emptiness, which Terry turned to chemical help to try and avoid, and instead ended up bound up in drug and alcohol addiction. "It was so bad that everything I had, I'd lost, up to and including my wife," says Terry. "The Lord spoke to me and told me that if I didn't wake up and see what was going on I wouldn't make it."

The turning point came on New Year's Eve, 1990. Terry was sitting in his apartment when, "I heard the voice of the Lord say, 'If you go back out tonight you're not going to make it back.' I called my parents and they came to pick me up for the church service that night. God saved me that night and I've been doing it to his glory ever since." He is now Senior Pastor of the Greater Zion Church in Gary, Indiana - a position he has held since the death of his father - and is happily married to Cecilia, whom he affectionately calls 'Punchie'. They have a four-year-old son and, at the time of writing this, were expecting their second child.

Terry still works with Robert and produces other acts, including label mate Sam Baker (whose 'No Love Lost' received a 10 square rating in CR30). One protÃ©gÃ© of Terry's that he's particularly excited about is a young lady from Atlanta, Georgia named Terri Carroll. "I just did two songs for her new album and we're going to finish it up as soon as I get back to the States," enthuses Terry. "I think it's gonna do even better than my record did. You'll know it's me right off -you'll know it's my production. It's the same type of style, but she's just got a vibe that people are just going to really get into. You're going to love her. Look for her - she's going to be great!"

After giving his 'Stand For Something' 12" single a 7 square rating in CR28, my fellow CR writer and good mate Andy Payne visited a specialist gospel record shop in New York and tried to buy some more of Terry's music, only to be asked, "Terry Who?" Did it come as a shock to discover that he had a bigger following abroad than at home, I asked. "Extremely!" is Terry's reply. "It's been such a great feeling to be received in the manner that I've been received. I was so excited when I got off the plane that I didn't know what to expect, and last night, when we were in concert over in (the Christian nightclub, Psalms At Chimes, the overwhelming response - the way people packed in the place, and the way they were in the concert - it was just great. I haven't even received that type of response in the States, so I'm just overwhelmed by the way people have received me and I just thank God for them."

When I caught up with Terry he had just been singing and speaking at a men's breakfast and prayer meeting at which he was special guest. Men have been the focus of a lot of ministry work of late - and not just Christian ministry either, as Terry had pointed out in his sermon, as well as when I spoke to him afterwards. "To be honest with you, I don't think we need to march for us to recognise where and what we need to be as men," Terry said, referring to the nation of Islam-led Million Man March held in Washington last October. "I don't need to march to Washington to have an understanding that I have a responsibility to myself, to my wife and to my children, to my God - that should be something that should be indwelling in every man. This men's conference has probably been the highlight of the visit here. I did not know upon coming that I would be attending an event like this. But after coming and seeing what it was all about, this has just really been great. I believe that when we make up our minds to let God reign in our lives - not just as men, but as people - that is when we will come to the forefront of what God has pre-ordained we should be. I think men are just so important to this society and the enemy is really trying to trivialise our role. Women have come up and had to be the strong part of the family and too many families are being raised in single-parent households. But I think once we realise how important God is, and how important we are to God, that is when we will come to realise our true role as men, and stand up and take some responsibility for that role."

Already, plans are being made for Terry's next UK visit, which would be with a band and include an appearance at the 1996 DMi Awards. In the meantime, and for the foreseeable future, Terry knows just what he wants to be doing. "I'd like to keep recording and producing and preaching and travelling - just doing all that the Lord has said for me to do. This is just so overwhelming for me; I'm taking it all in, but it's going to take some time for me to sit down and look back over some of the things that have gone on this week. It's just been remarkable. I cannot tell you how exciting it's been and how much more I look forward to continuing in the work of the Lord."

George Luke has just finished contributing to the forthcoming Rough Guide To Rock book and is currently hunting for a media-related job - open to offers.

I discovered this singer in London. Where can I get this album to buy. Also has he got any new music

Am just In love With Terry Garmon music
When was anyway(You bless me)produced??

I have so enjoy your music, I have been looking for a your latest CD can you tell me where to get it?

It was great listening to Terry music and reading this article on him. I have had the a chance of hearing him preach and being in his grandfather and father presence. The Lord has truely blessed him. I hope someday we will see each other again.

THIS MAN IS MY UNCLE AND HIS LIFE LESSONS HAS BEEN A LEARNING EXPRERIENCE FOR US ALL. MAY GOD GUIDE HIM AND KEEP HIM SAFE ALWAYS