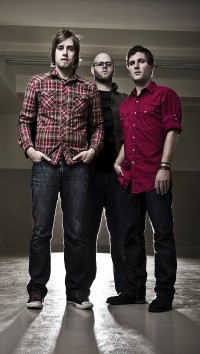 It's a little ironic that one of the most heavily played albums in recent times on the Cross Rhythms stations is 'Canvas Tears' by The Contact. Why ironic? Well, despite 'Canvas Tears' being a top rate modern rock set with songs showing such influences as Radiohead, the Foo Fighters and Muse whilst at the same time showcasing a band with a fresh vitality of their own, it still slipped largely unnoticed into the US marketplace when released by 7-Spin Records. And despite Cross Rhythms selecting five songs for airplay, no UK record company has picked up 'Canvas Tears' for UK release.

Hailing from Halifax, Nova Scotia, The Contact is composed of Geoffrey Fifield on vocals and guitar, Tim Fifield on bass, drummer Nathan Elliot-Doucet and keyboardist Jordan Allen. Geoff spoke about the band's background. "We've been around for a while in various different forms. There are three guys that have been playing in a band together since they were in high school which would be almost from the '90s. They were a sort of local band in the city here in Halifax. At the end of their high school years they all just mutually agreed to end things. But three of the guys in that band wanted to start a new band and one of the three was my older brother so I joined them shortly after that. That would have been 2001, 2002. We started out as The Contact and then we thought no, maybe we should just be Contact so we were that for a year and then we decided to stick with The Contact - we liked the 'The' and we've been The Contact ever since. That would have been 2003, 2004. At one point we were a six piece band - two guitar players, keyboard player, bass player, lead vocals who didn't play any instruments, and then we went down to a five piece and that's when I took over the lead singer role. I was playing guitar and singing and there was another guitar player and keyboarder and bass and drums. We were a five piece for a good length of time - we put out an album called 'Paralysed From The Soul Up' in 2005. The sound of that was - you know, limited funds, budget production - a little less than 'Canvas . . .'.

The sound of The Contact was evolving and their fan base was growing. In 2006 they connected up with Peter Khosta, a Christian entrepreneur originally from Halifax who had established the independent Christian record label in Indiana, 7-Spin Records. Explained Geoff, "We knew him through friends - I went to high school with his younger brother. So kind of through connections and things working out the way they did and obviously God's hand was involved in all of that, got connected with Peter. We saw eye to eye and we liked what 7-Spin were doing and decided to do some distribution through Peter and it worked well. He's also the guy that introduced us to Quinlan, the producer."

Grammy winner Quinlan (best known for his work with The Benjamin Gate) along with engineer Lil Thomas helped the band put together 'Canvas Tears'. Said Geoff at the time of the album's release in June 2008, "We've been self-producing for years, so we really needed someone not to 'tell' us what to do, but to collaborate on our ideas and let them fly. Quinlan's a great listener with a very open mind. During a recording session, we hit the climax of 'Anthem Of A Refugee' and it all came together for me - the realisation that all of these people - musicians, producers, mixers - are working as one to create something far beyond the sum of all the parts, which is incredibly moving and humbling."

Amongst the five CR playlist songs on 'Canvas Tears' is the moody "Black Sea". Said Geoff, "'Black Sea' is a song about perseverance. A lot of the album is about perseverance but that song in particular, not the title track but our first single and in many respects most places would say our biggest song. There's definitely a lot of struggle in the lyrics, it's about persevering in the darkness, feeling sometimes that we're just overwhelmed by the weight of the world on top of us. . . To live a truly Christian lifestyle is to live one that is counter-cultural. Our culture is more and more leading away from God and the ways that Christ has taught us. So there's really going to be a resistance in what we feel. We hang on and we cling on to the hope that Christ has promised us. 'Black Sea' uses the image of reaching the other side of this ocean that we're in. It's pushing through this ocean and the ocean is dark. It's an ongoing metaphor."

Another top rate track is "If I Fall". Commented Geoff, "It's a song of assent. Again a metaphor - this one of climbing, ascending this mountain. But then as we climb, as we ascend there are bumps along the way and there are times when we trip up and fall. But there's the promise that God is there with us in those times and when we do fall his hand is reaching down, always wanting to pull us back up to our feet, if we let Him. It's that positive tone of ascending the mountain but that realisation that even within that there are struggles, we slip and we fall and maybe even slide back a little bit. But the main goal is to keep on persevering. That is the theme throughout the album."

Geoff has the ability to write songs that though based on his deep Christian convictions resonate with their growing number of non-Christian fans. "I try to write songs in a way that can identify with both. I do that on purpose because I think that not only are we trying to reach out to a secular crowd in terms of how we live our life day to day and how we write our music and things like that. The music can be written in a way that there are many Christians who need to be encouraged and challenged in their faith as well and I think that the music can do both and the lyrics can do both. I try to find ways of expressing longing and feelings that might not just be exclusively Christian. As human beings there is really a yearning in our hearts for a Creator, for a purpose and that's something that transcends all races, all religions. There's that yearning for everyone to have that relationship with the greater being, with God, ultimately with Christ and writing songs that hit that point home."

'Canvas Tears' has been out for quite a while and The Contact are now writing songs for a new project. Said Geoff, "We're writing new music and coming up with a new goal, a new vision in terms of where the music needs to be and where God's leading us. I'm more of the lyricist. I like to have an idea of what God is doing in my heart and the heart of the band and the hearts of our generation and try to plug into that and hear the overall theme of the album even before it's written. And then try to move into that place and try letting the songs pour out of there. So we're kind of in the midst of finding that place and discovering those songs. Earlier this year we were thinking about recording in the fall but I'm doubtful of that happening now. We're hoping to be in the studio some time in 2011, but no promises."