The Flying Clouds Of Detroit: Vintage acappella harmonizers of '40s and '50s 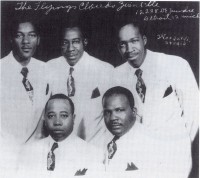 The Flying Clouds Of Detroit

Before the Winans clan, before Rev C L Franklin and his daughter, Aretha, before Mattie Moss Clark and the Clark Sisters, there was another act from Detroit making brilliant records and showing African American churchgoers that the Motor City had exceptional gospel singing talent. The Flying Clouds Of Detroit were sublime practitioners of jubilee harmony and during their heyday in the '40s and '50s made classic recordings, including possibly the definitive rendition of Thomas A Dorsey's "Peace In The Valley". As gospel expert Opal Louis Nations wrote, "[The Flying Clouds' never developed a national reputation but [they] are nevertheless remembered with reverence by those who went out to see them work their magic as one of the truly great acappella quartets of gospel's Golden Age."

The Flying Clouds origins go way back to 1929 when a teenage quartet called themselves the Russell Street Usher Board Four for their benefactors, the Usher Board of the Russell Street Baptist Church. Personnel changed so often in the early days that few remember the original membership of the group. Second tenor John T Evans remembers a fellow named Curry (first tenor), baritone Robert Ross and basso Horace Sirmans and himself being in one of the earliest configurations of the 1930s. In 1933 Henry Harris joined the group as manager and the outfit played local churches. Harris owned a seven-seater sedan. Their reputation grew and by 1942 they had adopted the Flying Clouds moniker. The name came from a popular automobile of the time.

Said Evans, "I remember back in 1936 the group came around to my house at five in the morning to try to get me to join. They were on tour to somewhere and needed a lead tenor. I turned them down, but I did start going to rehearsals when they came back." Harris, a smooth-talking promoter, got the Flying Clouds singing on many major gospel programmes aside from the odd sick room visits and homes of personal friends. Their intricate harmonies and switched leads were a revelation. Remembered Evans, "We entered harmony contests. These contests were often judged by big-shots out of Wayne University. None of us had had any music training. We picked up our parts by ear. We were told that the reason why we won the harmony contests so often was that we sang closer than singers who had had coaching. Our first concerts were for free, but when it cost us some to get to a programme we started charging 10 cents a head."

1940 also saw the beginning of the Flying Clouds' radio career. "Joseph Campau of CKLW in Windsor, Ontario, was looking for a gospel quartet to background Elder C L Morton's Wednesday midnight programme," remembered Evans. "Eight groups signed up to audition, but when they heard us they took us on, after only listening to a few bars."

Elder C L Morton, who fathered two sons (both became ministers), also broadcast from the pulpit of his church. The Flying Clouds were asked to contribute to Morton's programme. Herbert "Pee Wee" Pickard, pianist with the Gospel Harmonettes, remembered the flying Clouds on WJLB in Detroit. "They had a regular programme Sunday morning at 9.00am and we had one after them." Pee Wee was then pianist with the United Gospel Singers. The group ended up with two programmes on CKLW, one at 9.15pm on Mondays and the other on Thursdays at 1.45am. With slight changes in times for the shows the Flying Clouds stayed on CKLW for many years.

Group personnel changed during the war years as the odd member was drafted. A number of strong singers, like bass singer extraordinaire Jimmy Ricks, lead shouter Tiny Powell and Spirit Of Memphis star Silas Steele passed through the Flying Clouds Of Detroit ranks at various times.

In May 1946 the Flying Clouds approached Bob Thiele of Haven Records. Thiele had just set up Haven and was looking for talent. Haven issued four extremely prized and now tough-to-find records by the Flying Clouds during 1946. The group at this point included Elmer A Stallworth, first tenor; John T Evans, second tenor; Anderson Lee Hall (from Dallas), tenor; Leon Milton Irving (Ervin) from the Silver Bells Of Pittsburgh, baritone; and basso William "Windy" Turner from Arkansas. The songs they recorded were standard jubilee fare - Elisha A Hoffman's "I Must Tell Jesus", Joe Scriven's "What A Friend" and Thomas A Dorsey's "Peace In The Valley" - but their renditions, with super-tight acappella harmonies and on "Peace In The Valley" an extraordinary verse from bassman Turner, were magnificent. 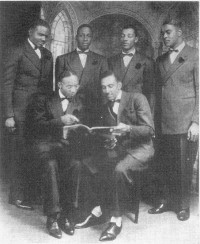 In 1947 the Flying Clouds recorded two of their most popularly received sides for John W Gilbert's Detroit-based Religious Recordings label. These were Fanny Crosby's "Savior Don't Pass Me By" (Pass Me Not) and Lucie Campbell's "Something Within Me". Author of the seminal book The Gospel Sound Tony Heilbut considers the Flying Clouds' reading of "Something Within Me" one of the great quartet tracks of the 1940s. The group's first Religious Recordings release, "Bye & Bye", was sold to King Records who did nothing to broaden its popularity. Strange again were the circumstances leading up to the group signing to Ivin Ballen's Gotham Records on 16th April 1949. The contract, which was originally prepared for the Silveraires of Philadelphia who had commenced recording for Gotham in January 1949, had had their name blacked out and the Flying Clouds' moniker written over it! Evans asserts that the group never recorded for Ballen, although he does recall being paid $25 per song per session around that time. This is the same paltry rate of advanced royalty that Gotham usually offered.

Bass singer William Turner had quit the group at this point and was replaced by Luther Williams who stayed with the Flying Clouds for approximately one year. In 1950 baritone Leon Milton Irving (Ervin) died and was replaced by James Copeland. Bass singer Porterfield Lewis from the famous Birmingham quartet, the Heavenly Gospel Singers, replaced Williams.

The Flying Clouds Of Detroit were at the height of popularity at this time, so much so that other Flying Clouds named groups sprang up all over the country, principally in Florida, New York, California, Alabama and South Carolina. "There were so many Flying Clouds groups around I had to register the name," Evans ruefully remembered.

WHAM, a TV station in Rochester, New York, offered the Flying Clouds a long-term contract if they would move to Rochester. Also in 1950, the Flying Clouds had a recording session with King Records. In 1951 there was a split in the ranks and Stallworth took Hall and Turner and with others they became the Mello-aires. The group recorded one 78 for Gotham but disbanded shortly afterwards with Stallworth and Turner entering the ministry. The Flying Clouds continued on though it wasn't until April 1953 that the group recorded again, cutting a session with Leroy Barnes of the Evangelist Singers for Ernie Young's Nashville-based Nashboro imprint.

The Flying Clouds disappeared again for four years before showing up in 1957 on JVB Records, the label owned by the legendary Detroit record shop owner Joseph Von Battle who rose to prominence recording everyone from John Lee Hooker to Aretha Franklin. By that time only Stallworth, Evans and Lewis had survived numerous changes in the Flying Clouds and Willie Banks plus a tenor singer remembered only as Simms made up the aggregation. This group had finally dropped acappella recording and their accompanists on the two JVB recorded releases (one re-issued on Checker) were Washboard Willie on washboard and Calvin Frazier on guitar.

The group recorded some more tracks for JVB. They were leased to Chess/Checker but they were never released. Slowly the group's reputation and popularity were being eclipsed by the harder gospel quartets that emerged in the '50s. When Willie Banks left the Flying Clouds Of Detroit to join the Jackson Southernaires in the early '60s that was effectively the death knell for the veteran harmonisers.

do you know anything about the female quartet that also sang on this weekly radio show on cklw?

It's my understanding that in 1959-60 there was a young man nicknamed Cheyenne (Amos Moore) who sang with The Flying Clouds of Detroit. I heard him do a lead of a song in one of the auditoriums in Detroit during that time. What do you know about him?

Great liner notes..but you failed to mention Joe W. Union who was considered as one the greatest hard lead singers of his time. According to the liner notes he died of pneumonia right before they first recorded!
AK