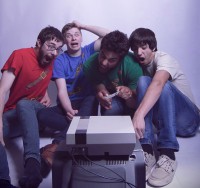 The Ongoing Concept are a heavy rock band from Idaho whose second album 'Homemade' for Solid State Records recently made number eight in Billboard's Christian Albums chart and number nine in the Top Hard Rock Albums chart. But chart details don't begin to do justice to a band who have caught the public imagination by making all the instruments from scratch for their album. Guitarist/vocalist Dawson Scholz told geargods.net about how 'Handmade' came into being: "We wanted to make an album from scratch, something completely DIY. We have been doing stuff ourselves for so long that it just seemed like the perfect time to take that DIY approach to another level. We were back and forth on the name 'Handmade' or 'Homemade'. 'Homemade' sounded way too homely. I pictured my grandmother baking a pie whenever I used that name. So we stuck with 'Handmade' instead.

"We had been making stuff ourselves for so long. We had made a lot of our guitar cabs from scratch. The van and trailer we have toured in had been gutted and completely redesigned to house bunk beds, a fridge, microwave, coach, TV, video games, etc. I think this 'build it yourself' idea has been so engrained in our heads that when I started coming up with concepts for a new album, it was just something that slowly began to make sense. I was researching how to make guitars one day and it hit me all of a sudden, 'Why don't we just build everything and record with those instruments'."

Dawson continued, "After a few minutes of researching further into the drum side of things, I realised this would be no easy task. That was when I knew this was the concept we had to do. I feel our band has always thrived on doing things that seem impossible at the time. It tests our abilities and makes the final product so much more worth it. We did a lot of extensive research on the internet, youtube, etc. There is a ton of sites that give really good information about all this stuff. We relied on those a lot. We also did a lot of trial and error. Kyle did a lot of the building and he did a ton of testing on other pieces of wood before doing anything to the actual instrument. Especially the drums. Some cuts were very precise and one mess-up could mean the whole drum was useless. A lot of math was needed because if you were even a millimeter off, the drum head would not fit on the drum properly. It was a bit nerve racking, so we had to take our time."

The response to 'Handmade' has been overwhelmingly positive. New Noise magazine called it "a pretty impressive cake to pull out of the oven," New Release Today enthused, "Ongoing Concept have crafted yet another hardcore masterpiece" while Jesus Wired claimed the album "expands the band's sonic horizons."

One is forced to observe that making a set of instruments must be difficult enough but how did they make them sound as good as they do? Dawson admitted, "We had no idea if they would sound good. Everyone on the internet says pine is the WORST wood to use for this stuff. But we cut down a pine tree so we couldn't really go back. I guess out of all of it we started to realise one thing, 'As long as you take the time to build the instruments correctly, they are bound to sound good.' Who cares if they are made out of some soft wood that breaks easily. If they are soft, don't throw them around then! I go to these certain forums sometimes and people just go on and on about how some type wood is better than the next. Who says it's better? That person? Is there some group or organization that votes on what type of wood, pickup, string or amp is best? Of course not, it's completely personal preference. I think that's what makes music so special. You could have the worst equipment in the world or the best, the way the music impacts someone will be completely different to each and every person. There is no right or wrong way to make music. Just make it."

The handmade principle even extended to mics and preamps. Said Dawson, "We said, 'How hard could a preamp be to make?!' Ha! We did actually make our own cables though. At least we bought all the bulk materials to make them. It's way cheaper that way. As far as mics and preamps though. I used the UAD Apollo Quad for my interface and the Audient Asp880 for my preamps. Those two together are great for what I needed to do. As far as mics, I used the go-to Sure Sm7b for some of mine and Kyle's vocals as well as a Neumann U87 clone by this company called Advanced Audio microphones. They are based in Canada and make really good clones of famous mics. I used a lot of their mics for overheads and stuff. Of course I used the sm57 for snare and guitars and the good ole sennhieser md421 for toms. I really didn't use anything fancy. I feel the type of mic or preamp only makes up a fraction of the sound. Placement and mixing make up so much more. I didn't really go too heavy on expensive gear. We are way too poor for that."

The Ongoing Concept consists of three brothers and a childhood friend - Dawson, Kyle Scholz (keyboards), Peter Scholz (drums) and TJ Nichols (bass). In 2010 they released an independent EP, 'What Is My Destiny', and in 2011 another EP, 'Arrows Before Bullets'. It was signing with Seattle's Tooth & Nail/Solid State Records that shot the band to national popularity. Even though labelled hard rock/post hardcore/scream there was an eclecticism continually showing through the band's work. Said Dawson, "Some bands may say we play heavy music and that's supposed to be guitar, bass and drums. I look around our music space and see a trombone, a piano, a harmonica and I think, I wonder what we could do with that?"

In August 2013 Solid State released the band's western-influenced 'Saloon' album. It reached 38 on Billboard's Heatseekers chart and sputnikmusic.com wrote, "'Saloon' is an example of the perfect amount of experimentation gelling with fresh instrumentation wrapped up in a faintly (wild) western package. The album opens with some nice parlour-core in its title track and serves as a damn good template on why this album succeeds. This song, and almost every other, grabs your attention with its sharp balance between its novel presentation and catchy metal roots. If not immediately evident from the album title, 'Saloon' has a theme that is vaguely southern as well as vaguely wild western in sound. The band does a good job not soaking this record in zingy southern sauce but by use of a banjo here, a southern rock lick there applies just the right amount of southern bite to the record to let you know of its influence."

Dawson spoke to jesusfreakhideout.com about the band's attention-grabbing name. "It kinda just formed into what it is now. I love concept albums and I feel like our band - our name and style - has kinda formed into something that is a concept in itself. I feel like it's open-ended because the 'ongoing' concept could mean literally anything that you can imagine it be. I feel like that kinda keeps us conformed into having to be something, but at the same time, no one can really guess our next move. I like that because I don't like bands that are just so predictable that you know exactly what their next record is going to sound like, or you know exactly what they are going to do. I love bands that are just unpredictable in every way. I feel like our band has kinda been able to keep that sort of vibe, or idea. You know? I don't really know what I'm trying to say. I just feel like our band name kinda suits what we do and what we've done in the past, but I also feel like it leaves it very open for something to change and it actually make sense - just because we're The Ongoing Concept."

Dawson admitted that recording 'Handmade' was tough. "Having to make our own gear was hard enough and having to actually write music seemed like a whole other world away. We didn't want the 'handmade' concept to be the only thing good about this record. We wanted the music to be great as well. We spent months and months doing pre-production, preparing for this record, but after all that, we still weren't satisfied. We would throw songs away day after day and it seemed we were not getting anywhere. 'Saloon' was such a long process and I felt a lot of those songs were years in the making. I felt we had to take all the ideas we had for that album and somehow attain them within a one or two year period. That is hard to do! It's not easy to write music on a deadline. We are all perfectionists too so that doesn't help. If we couldn't listen to the whole record front to back without getting bored, the album wasn't good enough. We had to keep pushing the release back month after month. I know a lot of our team (label, management, etc) were tired of hearing we weren't quite finished. It was hard to assure them that it would be worth it in the end. When it finally started to come together we knew the wait was worth it though. I think all the songs on this album are great. I couldn't be more proud!"