Third Day: The rocking phemonenon talk about 'Conspiracy No.5' 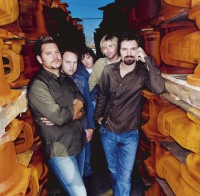 The general consensus around UCB radio is that 'Conspiracy No 5' by Atlanta's Third Day is probably the best Christian rock album of 1997. Its turbulent, brooding, snarling guitar sound is an assault on the nervous system; its lyrics lucidly pinpoint topics like prayer, mercy and secular radio hit songs; while in Mac Powell the band possess a vocalist whose gritty growl has become one of the most instantly recognisable in CCM. The band's previous album, the Reunion version of 'Third Day', sold over 200,000 copies, got distribution into the mainstream market place and won for the band a Dove Award as Best New Artist. CCM industry expectations for 'Conspiracy No 5' were consequently very high though bassist Tai Anderson said producer Sam Taylor "kicked our butts against being manipulated by such pressure. He said we need to make an album that's going to stand the test of time and define who we are."

In that 'Conspiracy No 5' succeeds magnificently. The attention-grabbing title comes courtesy' of All Star United's guitarist Brian Whitman. (Third Day tour regularly with the Brit rock team.) Mac Powell explains, "Brian got us to start watching the film JFK. We'd seen it, but weren't that into it. We started reading books by Jim Garrison (the prosecutor played by Kevin Costner), went to the assassination museum in Dallas (and so forth)."

When band members' wives expressed concern that the term "conspiracy" implied negative connotations, Anderson pulled out a dictionary. "I copied down the definition of 'conspiracy'. We got down to the fifth definition," says Anderson. "It was, basically, 'two or more people agreeing together to accomplish the same purpose.' Obviously, there's definitely a spiritual parallel there."

In fact, the bass player asserts, the entire concept of "conspiracy" offers that there's more to something than the topsoil indicates. "Christianity isn't about just praying before you have a Big Mac. It's about a relationship with Christ. With the album, we're trying to challenge people to dig deeper."

Powell cautions listeners against presupposing that this title indicates that Third Day is trying to hide its lyrical meaning. "We want to be careful. There's a balance, especially in Christian music. You don't want to freak people out and you don't want people to think you're political or something. At the same time, you want to raise some eyebrows."

Lyrically, the album is a progression from the simple in-your-face Jesus statements on 'Third Day". "When the songs were written on our first album, we were still pretty young Christians," Mac says. "I was a baby Christian. I just knew a surface, basic relationship with Jesus and I wrote songs based on that. As time went by, I studied the Word more, went to church more and learned more about God. A deeper relationship with God is more than going to church and more than just saying our prayers before we eat. It's a life-changing thing. Hopefully, that is expressed in this record."

"We weren't intentionally going for a new sound or anything," David Carr says. "It just kinda happened." As for the lyrical content, "Every song has a deep meaning, but you have to dig," he says. "It's a more personal album." The drummer says they consider the songs on 'Third Day' to be "bread and milk", the basics of Christianity. "We're trying to get to the meat now."

Although they hope listeners will go to the trouble of digging through the lyrics for themselves, the members of Third Day are willing to discuss the songs with you. Most of the time. "We don't consider ourselves 'artsy' kind of people," Mac says, "but there's maybe one or two songs on this record I don't want to tell the whole story about. But there are many other songs we are happy to tell people about."

However, Tai Anderson points out it's okay for listeners to come up with alternative meanings, too. "If we just tell someone what a song means when we wrote it, that might limit a revelation they might have by listening to it." For example, the song "Blackbird" meant something special to one listener. "A guy came up to us from New Orleans, who had been in a mental hospital. God used that song to speak to him to work through some of the issues he was going through. It drew him closer to Christ. If we had explained the song to him, maybe he never would have gotten that."

Of course, listeners aren't the only ones who might find a different take on a given song. "At an interview," Mark says, "one of us was talking about what the song is about and the rest of us are going, 'What?'. I think it's cool if the five of us can find different meanings in the song, then whoever buys the album, I think they'll be able to find different meanings too."

Mark also says that the songs are built a little less obviously. "A lot of times, when you listen to a song and get to the middle section, there's this little bridge and it's like, 'Now, we are going to tell you what the song's about and gonna teach you a moral lesson.' On a couple of these songs, at least, we're gonna create a little confusion in the middle. Maybe the songs not about what you thought it was about up to that point - and when you get back to the chorus, it has new meaning."

But don't worry. Through all of this the record does have a specific unifying theme: "People have said throughout history that deep down people are good," Mac says. "I disagree. I think deep down everybody is bad. Until we realise how truly bad we are and how lost we are, we won't realise how gracious and loving and merciful God is because of what he has done for us. That's what the album as a whole talks about."

The band is at a crossroads. With all of the opportunities opening up for them, they have to continually define who their target audience is. David says, "We hope to tear down some of these walls between 'Christian music' and 'secular music'. God's gifted us to play and to write songs. Let's just enjoy that, let's not try to define everything. Let's enjoy music as God gave it to us and let's worship him through it."