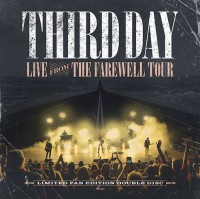 THE HITMAKING southern rockers Third Day, who broke up in 2018 after two decades of touring and recording, have announced the surprise release of a new double CD live album. 'Live From The Farewell Tour' is being released digitally and as a limited edition CD. Read a band statement, "During the tour, the band captured some of the very special live moments which have been compiled into this exclusive double disc set. This collection is meant to be a gift back to the fan community (aka 'the Gomers') to commemorate the Farewell Tour and all the great memories these songs have brought about over the years. This limited 18-track release is self-produced and made with love by our long-time keyboard player and producer extraordinaire Scotty Wilbanks."