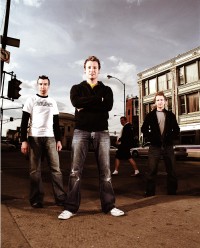 A lot, an awful lot, has happened to Thousand Foot Krutch since 2002 when Cross Rhythms wrote about the band as part of its Canadian Scene article and Cross Rhythms radio were giving heavy airplay to the band's gospelisation of EMF's "Unbelievable". The band have become, quite simply, one of the biggest Christian acts in the USA with their latest album 'The Art Of Breaking' entering America's mainstream album chart at 67 in its first week of release. The album, a smouldering mix of rapcore, alternative and modern rock is, in the words of frontman Trevor McNevan, "A new departure for the band stylistically and song-wise." Yet despite the broadening of the band's stylistic appeal they remain heavily committed to challenging spiritual lyrics.

Take, for instance, the title track on 'The Art Of Breaking'. Said McNevan, "The 'art of breaking' in general is talking about that moment in each of our lives, whether it happens once or twice, the moment when we come to the breaking point. A lot of people look at the breaking point as a bad thing, but it can be 50/50. Everyone has their own style of breaking down. Spiritually, it's when you come to the end of yourself and you realise all the blood, sweat and tears you're doing is not going to get you there."

The theme of the album was echoed in the recording process for 'The Art Of Breaking'. As McNevan told Christian Retailing magazine, "It's funny how God works. During this record, everything I can think of has gone wrong - from the recording process, the actual tracking and development, to things in my personal life. It basically seemed like so many crazy challenging things have happened this year. I've definitely personally felt the closest to the end of myself."

Two of the outstanding songs on 'The Art Of Breaking' are "Absolutes" and "Breathe You In". Said McNevan, "'Absolutes' covers the questions when I'm out there and talking to kids, listening to the cries of their hearts. They say, 'We want the truth; we want the absolutes. We're tired of all the sugarcoating and everyone trying to make everything sound great.'" "Breathe You In" is a song of dependency. Continued McNevan, "It's going to mean a lot of different things to a lot of different people. For me personally, it's about (saying) 'God, I need to breathe you in.'"

Thousand Foot Krutch consist of Trevor McNevan (vocals), Joel Bruyere (bass) and Steve Augustine (drums). Trev is in fact the only original member of the original four man line up Toronto band. Putting out an indie record, 'That's What People Do', in 1997, then 'Set It Off' in 2000, the band earned hardcore fans, thanks especially to relentless touring. Right from the off TFK played around 200 gigs per year with such bands as Finger Eleven and Tea Party. Signing with Seattle's rock independent Tooth & Nail Records proved to be the big breakthrough for the band. "We were looking for a label that loved music and would work hard," McNevan explained. "We prayed about things for quite a while and it really felt like Tooth & Nail is where we belonged." Soon after the decision was complete, the band found itself in Seattle working with veteran producer Aaron Sprinkle (MxPx, Anberlin) on their album 'Phenomenon'. Said McNevan on the release of 'Phenomenon', "This record is more defining and focussed. It's a rock record, all the way through, with heavy grooves that aren't traditional rock. The element of hip-hop can be felt in the vibe of the record, but as far as rhyming and scratching goes, you won't find much of that this time around."

In addition to the ever growing success of Thousand Foot Krutch, they also have several other impressive projects taking off. One is the side band FM Static (whose album 'What Are You Waiting For' was released in 2003), who actually opens for TFK at many events and has McNevan and drummer Augustine doing double duty. And with the two other FM Static members, Justin and Jeremy Smith, McNevan formed Reakt Clothing, with the band Three Days Grace as first endorsees. Augustine also has formed a production company called Stringnoise that provide sound and lights for Thousand Foot Krutch and other touring acts.

Now 'The Art Of Breaking' is taking Thousand Foot Krutch to a whole new level. With legendary producer Arnold Lanni, well known for his work with Our Lady Peace, Finger Eleven and Kings X, the band have developed a sound which is bright, powerful and accessible. Truly they have broken through.

Thanks for the article as I now have the artist names in my quest to learn more about TFK.
I first heard Breathe you In on the Radio while driving my car to work without knowing the artist TFK. I searched for about 3 weeks hoping to catch the song title and listening to internet radio. One morning I needed to be lifted up and asked God for help. I turned on the internet radio and the song Breathe you In started playing and it was then I learned that it was Thousand Foot Krutch. I immediately purchased the Art of Breaking album, burned it to cd and have already played it several times through in only a week. 10 yrs ago I was a Heavy Metal fan and gave all my cds away. I now, knowing I am free in Christ and believe Christian Rock doesn't offend God, have discovered it's ok to worship him this way especially when I can understand most of the lyrics.