Thousand Foot Krutch re-issue 'The End Is Where We Begin' 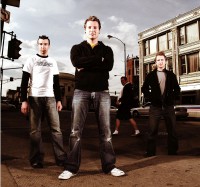 THE MUCH playlisted rock band originally from Canada, Thousand Foot Krutch, are releasing a limited edition double vinyl re-issue of their 2012 album 'The End Is Where We Begin'. The second LP in the package contains previously unreleased mixes of the songs by such figures as Britain's Andy Hunter and Robbie Bronnimann. Read a band statement about the vinyl release, "Not only are we vinyl fans as well, but this particular album marked the first album in our journey of going independent." The vinyl is slated to begin shipping in mid-December.