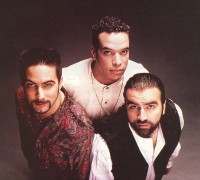 Life has been a little frantic for Three Crosses since their debut album. The band's high profile tour with Michael W Smith and Jars Of Clay pitched them at huge audiences. Life as an up and coming band has its sacrifices, particularly in busy days when photo shoots, interviews and other demands are made. In the middle of one of those days, the band were hopelessly lost driving to their next appointment. Under pressure their next wrong turning took them into a side road and a church with three crosses on the front. Pausing in this run down area, God broke in and refreshed them. They named their second album after that road.

To find out more about 'Jefferson Street', I talked to the Memphis band's keyboard player Ralph Barientos. Before I tell you about our conversation, let me warn you about Ralph. Friends say that I have a loud personality but compared to Mr Barientos I am a shrinking violet. The conversation is frequently punctuated with Ralph's huge scary bear-like laugh, so life affirming that 'laugh' is too weedy a word to describe the sound. Barientos is an over-the-top dance-on-his-piano wild-man-of-rock-type of guy. If Jesus came to give us all abundant life, a conversation with Ralph makes you think that he's probably nabbed part of your share! As our conversation begins I discover that he hates the name Ralph and all his friends just call him Barientos. I am invited to be a friend!

Like their self-titled debut, 'Jefferson Street' links Three Crosses to legendary record producer Barry Beckett who handled half of the album. I wondered how the association began. "A lot of events that took place with our first record were nothing less than miraculous," Barientos explained. "It was really a chance meeting - one of the people who worked in the publishing department had a record label and knew Barry from way back and said he'd give the tape to Barry to see what he thought. Barry heard it and loved it! We were thrilled because Barry's done stuff with Bob Dylan and Dire Straits and a lot of people we highly respect in the music business. We talked about Dylan and 'Slow Train Coming' and he told us some interesting stories but what he really loved talking about was when he was in the Muscle Shoals rhythm section. He worked with Aretha Franklin, which he said was one of the best times. Barry is all over those Stax records when he played keyboards."

So what did Barry Beckett make of you being Christians? "He was cordial about it," Barientos chuckled. "He's a quiet sort of man and polite. He was saying, 'Whatever floats your boat boys, that's fine with me!'" Beckett's musical background had an influence on the sound of Three Crosses as Barientos explained. "On our first record it gave us the opportunity to record the way we wanted to record at the time, which was just setting up the band, running the tape and going for it. There wasn't a whole lot of overdubbing so it was just like recording live. I think that his background and how he recorded back then had a big influence on our tracks."

So was making the second album a big change from recording the first? "I think the main thing is that you look to do something different from the first time, whether it's how you write the songs or how you record them. I think the only difficulty is in trying to make the second album better than the last one. The way you do that is by changing some things. I think we explored recording differently than on the first album."

To these ears, 'Jefferson Street' is, ahem, streets ahead of their debut, containing a more layered polished sound without losing any of the band's raw energy. The obvious big hit is the lighter acoustic flavoured "The Stone Was Rolled Away" which is musically very similar to Jars Of Clay in style. This isn't surprising when you consider that it was written with the guys from Jars in the middle of the night on the tour bus and that Christendom's favourite art folk rockers guest on it.

One of the angriest songs on the new album is "Strangers In The House Of The Lord". Barientos told me about how that song was written. "We were on tour", he remembered. "We were in a hotel room and the bible just happened to be open at Jeremiah 51:51. Eddie (Nicholson, the band's guitarist) was tinkering on the guitar and had a riff that he was working with. All of a sudden Stephen (Pasch - singer) picked up the Bible and started reading the Scripture which fitted with what Eddie was playing. The Scripture itself is angry, so that's why the song came out that way. The Scripture is talking about the people who are claiming to be with God and they're not really. They might be doing all the right things on the outside but not on the inside. Looking at it from today's perspective, a lot of people do the same thing. Sometimes don't even realise it - it's not done maliciously, but sometimes we get caught up in the cause and not in the person of Jesus. The song is a reminder that God wants us to concentrate on him and be obedient to him. Maybe that's where the anger comes from."

The infectious "Welcome To The Jesus Movement" stands out as one of the songs which will quickly worm its way into your brain. It is very positive, talking about a great spiritual move and I wondered what Barientos was seeing as he travels around. "I think that what's happening is revival. There's some change going on. We're coming to a crossroads, all of us on this planet. Are we going to choose to take the road that leads to spirituality or the road that leads to materialism, which leads ultimately to decadence? I think the song is a celebration of the movement that's happening. People are starting to realise they need something good in their lives and some positive influence and focus in their lives. That focus is coming from the Jesus movement - it's only in moving towards Jesus that we can honestly find that. The song is like an anthem for the time. It seems to fit the sign of the times we're in."

It is clear that Three Crosses are enjoying themselves. When we spoke, Barientos was having yet another busy day helping with the preparations for the band's forthcoming tour. So, does he suffer from stress? Barientos guffawed, "Our lifestyle is more stressed since we've done more touring. Everyone just sees the glitz and the glamour of it, but there's a lot of work involved in taking a band on the road, recording and making appearances. Believe me, I feel blessed that God had given me the chance to do what I've always wanted to do, so I'm not complaining! But there is a lot of stress, because it's a fast paced lifestyle. We are able to at least control it because of our relationship with the Lord and he helps us to quell a lot of our anxieties. Fellowship is also important so we try to share a lot with each other and spend time in prayer." One of the challenges of being part of a busy band is the fact that, unlike the rest of us, the majority of a band's "work" takes place at weekends. How do Three Crosses live up to often being away from their local church on Sundays? "It's definitely not easy getting to a church so we rely a lot on each other for spiritual revitalisation," Barientos continued. "We try to get inspirational tapes for ourselves by speakers like Charles Stanley and Steve Brown. We try to 'have church' on the bus! Sometimes our pastors send us tapes of their sermons and that gives us a bit of a link to home."

One song from 'Jefferson Street' which has proved a big hit in the Rimmer household is "We've Got To Get Together". Barientos acknowledged the debt the band owe to the Stones when he said, "They have been and always will be a big influence on us. We've always loved the freedom the Stones had and the attitude that they had which came out on their records. We try to capture a little piece of that on 'We've Got To Come Together'.

They have succeeded in capturing the mood of The Stones so well, it sounds like a track from 'Exile On Main Street' and my wife Pippa often breaks out into rampant Mick Jagger impressions strutting and pouting and shouting "Awwriiight!" when it comes on the stereo. Barientos gave his loudest laugh when I told him this and as we said our goodbyes, the sound of his laughter rang in my ears.