Tiger Drive: The rock-tronic power trio on the cusp of big things 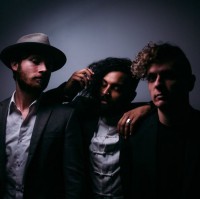 Getting "discovered" is still the hope and dream of countless thousands of independent artists. They may have the creativity and zeal to play small concerts and release low budget recordings but indie bands and soloists know in their heart of hearts that until a big music mover and shaker takes them under his or her wing, the chances of reaching a mass audience are slim indeed. So the announcement that Nashville-based electro pop rock band Tiger Drive have been signed to the Radar Talent Agency is a big deal both for the band and growing-by-the-day legion of fans.

The hugely influential talent agency's announcement spelt it out. "Radar Talent Agency is thrilled to announce the release of Tiger Drive's new radio single 'Here We Come'. After discovering and signing NF to a landmark deal with Capitol Records CMG as their first hip-hop artist, Radar Talent Agency's owner/agent Doran Eichenberg has been searching the world for that same level of talent and passion. In February of this year, after watching the music video for their song 'Legend', Eichenberg knew he had found what he'd been searching for: Tiger Drive!"

Described as a "rock-tronic power trio," Tiger Drive's sound is a cross between MuteMath, Imagine Dragons and Kenye West. The band were formed in 2016 and consist of Jeremy Claudio, Cory Pierce and Ricky Smith. They put out a YouTube video, "Understand", in 2016 and in October 2017 their debut independent single "The In-Between", inspired by the Netflix series Stranger Things, was released. It caused a ripple of interest. But it was the single/video "Legend" which opened the tantalising possibility of big things for the trio. Now with the "Here We Come" single, which has been described as "masterfully crafting together two of the most powerful forces in the universe, music and emotion," things look set for that breakthrough.