Touched By A Song: "Light Up The Fire" by Parchment

Steve Wheeler tells how a track by Parchment impacted his life. 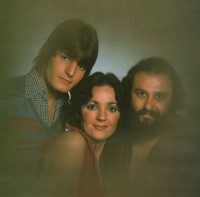 It was one of those balmy, late summer evenings and several of us had made the trip up by minibus to the final day of the Bromyard Folk Festival. I had made the short journey from the RAF base at Credenhill, Hereford, accompanied by half a dozen RAF apprentices, all around about the same age as me. I had just left school, had recently celebrated my 16th birthday and it was early September 1973. I wasn't in the RAF myself, but my father was and having just arrived back from a two year posting in Maastricht in Holland I hadn't had more than a couple of weeks to acclimatise myself to my new surroundings.

My parents, both strong Christians, had always encouraged me to attend their church services. I had reluctantly 'tagged along' as often as I had to, in order to lead a quiet life at home. Church had been tedious to me and I hadn't really thought about God as a friend, or a Father. Instead, I thought of him as 'something believe in if you want to and a name to call out when you get problems you can't handle yourself.'

As I sat on the floor of the tent along with dozens of other young people, we watched a small procession of bands and artistes perform on the primitive stage. The final act, a three piece folk-rock band, walked onto stage and I began to take a little more notice. They were Parchment and the song that hit me straight between the eyes was a song that although I was unaware, had .enjoyed British chart success. The song that touched me was "Light Up The Fire".

As Sue McClellan, John Pac and Keith Rycroft belted out the show stopper, the words caused me to reflect upon my life and the direction I had chosen to take. When the line "Open the door, let Jesus return" sank in, I began to realise that if Jesus did return at that moment I would definitely not be ready for him. Due to my Christian upbringing I knew what the Bible had to say about heaven and hell, sin and forgiveness, but I wasn't-sure if I was one of God's children or not. In fact, never really examined my life in those terms before. I suddenly wanted to be sure, wanted to belong, but didn't really know how, or understand why. A wave of panic swept over me and I began to be convicted by the power of God's Holy Spirit. For the remaining hour or so of the concert I can recollect very little except a distinct feeling of uncertainty and confusion in my life.

Driving back after the gig, I sat in the front seat alongside the driver, a mature Christian man who also happened to be one of the trainers of the group of RAF apprentices sitting in the back. As they larked about, singing noisily and telling off-colour stories in the rear of the minibus, the driver struck up a conversation with me. As we talked, I again felt the feelings of conviction sweep over me and I began to feel decidedly uncomfortable.

"Wouldn't it be great if Jesus returned tonight?" he asked enthusiastically. "Yes," I gulped, having horror-visions of being left behind, lonely and outside of the family of God for ever. I was glad the journey home was a short one, and as I jumped down from the minibus and made it through the gathering darkness to my home of less than two weeks, I decided I needed to do some real business with God.

In my bedroom I knelt down beside my bed and in the best way I could I did something that would change the whole course of my life. I dedicated my life, body and soul to the service of Jesus Christ. Then I sat and waited for a while for something to happen. There was no startling flash of light, no angels singing and no special feeling, other than relief that I knew would last forever. I went to bed not fully understanding that a fire had been lite in my life which now, 22 years later, is continuing to burn brightly.

Colours of day dawn into the mind
The day has begun, the night is behind
Go down in the city and into the street
And let's give the message to the people we meet

Chorus
So light up the fire and let the flame burn
Open the door let Jesus return
Take seeds of his Spirit, let the fruit grow
Tell the people of Jesus, let his love show

A Christian friend took me, as an unbeliever then, circa 1972, to the YMCA to see Parchment. I was impressed, bought the album, listened to it many times and, in a chain of God-led events, finally committed my life to Christ on 18th August 1974 and have not looked back to my old life since. Thank you Lord for everyone who helped me find the Truth.

This was the only Christian song I ever remember my son singing. He died 38 years ago, tragically in an accident at the age of 16.

I played double bass for them briefly on some of their gigs and studio sesions in Liverpool.

Knowing John and Sue as a young christian, I was encouraged and motivated to serve the Lord in music, and am still playng !

For more on Parchment visit the Parchment artist profile