After years within the RSCB mainstream, TROY JOHNSON has settled for a consistent Christian life and songs that speak spiritual truth. The American singer spoke to Jan Willem Vink. 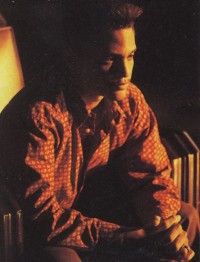 'I Will', Troy Johnson's second album for a I Christian record company, offers a nice I blend of pop, rock, R&B and soul. Produced by the Gotee Brothers and John and Dino Elefante, Troy, who mixes influences of both Michael Jackson and Bryan Adams, is definitely no newcomer to music. He has made four albums, two of which he recorded for mainstream record companies. Troy has a powerful testimony of how God has changed his life and now exhorts his listeners to live one hundred per cent for Christ, referring to his earlier life as being the king of compromise.

Things began to go wrong in the young Troy Johnson's life when his parents broke up. "Your father gives you identity," comments Troy. "When my father disappeared out of my life, because of the divorce of my parents, I lost my identity." Troy started rebelling. Up to that point it was his father who dealt with him. "My father, even though he wasn't a Christian, was a disciplinary and he had some Christian values. The divorce devastated me because now I was a child with no direction. I ended up running with the wrong crowd, getting on drugs, rebelling. I think one of the things that works for the Devil the most is to destroy a family, the union that God put together between a husband and a wife."

At a young age Troy started to become interested in music. He quotes bands like Earth Wind And Fire, the Jacksons and James Brown as his influences. "It wasn't until 13 that I got my first bass guitar for Christmas," comments Troy. "At 17 I decided that this was what I was going to do for a living. However, I didn't plan to do it for God at the time."

Continues Troy, "I became a Christian years after my parents divorced, after rebelling and going nuts. It was a friend of mine that I used to hang out with that gave his life to Christ. He used to tell me about it but I didn't pay much attention. But I guess I did a little bit. It was always in the back of my mind. My mother sent me away to my grandmother in Kansas, because I was really jacking up. I had been through five, six different high schools and had been arrested. My mother figured if she did send me away and I went into a different environment that things would change for me. When I got to Kansas I found the same crowd and began to do drugs and things. One night I came in and I was vomiting blood, after one night of being high. I knew then it was wrong what I did. I was going further and further backwards. By this time I was ready to give up and let God do his thing because I knew he was there and what I was doing was wrong. That night by my bed I said, lord, come into my heart.' Something happened, peace came over me. I was totally changed from that moment.

"But I didn't know that I had to go to church, or read the word. I had this change, but like with a seed, I didn't water it. I stopped doing drugs and the other things that I did, I had peace and felt good but wasn't being discipled. I didn't take care of myself spiritually so I backslid and started to smoke weed again. It was about that time that I really pursued music, aged 18."

Troy continues, "Later on that year I ended up getting a deal with Motown Records. I ended up going through a couple of years of being backslidden. By the time my first record, 'Getting A Grip On Love', was coming out with Motown, I was 19 or 20, I recommitted my life to the Lord. I had really gotten on drugs; I had done a lot of cocaine. I felt that familiar feeling again, that feeling of death, that feeling of losing, that feeling of being totally away from God. I began to read the word, going to church and getting around the right people and being discipled. Now I was growing. I got really frightened because I recognised how messed up I was, because the word has a way of exposing your heart. It's sharper than a two edged sword. It will open your heart and let you see exactly what's in there. I started seeing how messed up I was."

In 1989 Troy recorded an album for RCA titled The Way It Is', which he refers to as a Christian record for a secular label. The songs were more evangelistic oriented. Says Troy, "But I was still involved in some sin, behind the scenes. I decided I was no longer going to be a compromised Christian. I wanted to be 100 per cent. Jesus promised peace that surpasses all understanding. I began to pray a dangerous prayer. I wanted his perfect will for my life. I no longer wanted to do what I wanted to do. I knew it meant that I was going to go through some desert. God took this junk out of me and put new stuff in me and built a lot of character in me and I thank God for that today and the reason what I am today is because of what I had to go through. The reason why I stand so strongly against compromise is because I probably was the king of compromise. I recognised that as a compromised person I wasn't receiving all that God wanted me to receive. I was rejecting what God had for me. Why live 50 per cent for Jesus? Why go half way? He went 100 per cent on the cross."

Several deals with major secular companies were cancelled at the last minute. Troy ended up going through a desert period where for the first time in his life he did a non-music job for a living. After a while he began producing some artists from his church and approached Word Records. But they ended up being more interested in signing Troy.

Comments Troy, "I wasn't too excited about it. But this door was opening. I felt peace about it. Two years after that point, I signed with Word, that's how it happened." Troy then went on to record 'Plain And Simple' and recently 'I Will'. Troy is now able to stimulate other Christians to live a dangerous life, free from compromise.

We are so proud of our nephew; he is a wonderful, well-rounded, loving human being.

Hello Alanna, I grew up with Troy and played on a football team , and High school basketball team with him. I now all of his relatives and I can get your information to him. You can contact me @ ride850i@hotmail.com

I met Troy in Ibiza many years ago when he came to our little church in Ibiza. His song seeds of life was the first song that i had ever danced to at church, and it was the start of my career. I have recently opened my own dance school in Ibiza, after having completed a degree in contemporary dance, and plan on using my dance for the work of GOD. I would love to contact him again. If anyone could help me I would be very grateful!