Tony Cummings reports on how BBC Radio 4 came to play, if briefly, a WANDA JACKSON song 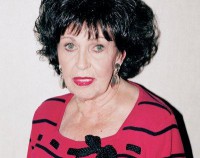 It only happened a couple of weeks back but already it has gone into radio history. It has been reported in newspapers from Nigeria to Australia. What happened was the eminent Lord Digby Jones, former head of the CBI, was on BBC Radio 4 giving his thoughts about the new head of the World Trade Organisation. Suddenly the sound of gospel yodelling came loud and clear over the airwaves. For more than 10 seconds the song "Jesus Put A Yodel In My Soul" performed by Wanda Jackson was heard before a dazed presenter Paddy O'Connell came in to apologise for the "glitch". The Corporation later explained the mishap occurred when the battery in the radio car Lord Jones was speaking from in Warwickshire began to run out and the engine had to be restarted.

O'Connell explained, "Apologies if you heard us leave the radio, there has been some kind of glitch and you have heard an orchestra instead of the sweet sounds of our guests." Confused listeners immediately took to Twitter to speculate the programme had been "hacked" or "yodel-bombed".

The incident so intrigued the BBC that in the next few days they tracked down Wanda and she was able to give part of her testimony in a recent BBC news magazine website article In Search Of A Mystery Yodeller. In it the yodelling gospel singer told her extraordinary tale of a million-selling rockabilly classic "Let's Have A Party", dates with Elvis Presley, marriage to George Albert McGann the murderous leader of the Dixie Mafia, and heroin addiction. Then in 1971 Wanda's life changed. She told the BBC, "One night I was just driving around and saw a church. I wandered in and three nights later I accepted Christ as my saviour. He gave me a new life, a new song to sing, and a new drum to march to and I've never been the same. I was shooting up at six hour intervals and I haven't had a fix since then. I have no desire to."

Through Word/Myrrh Wanda released several country gospel projects including, in 1974, the single "Jesus Put A Yodel In My Soul". The country, gospel and rockabilly singer told the BBC, "I always yodelled. People just love yodelling so my [second] husband challenged me: 'why don't you write a yodel song but make it about Jesus?' It's a signature song for me now." And so it is. The revival of interest in rockabilly has ensured that Wanda, now aged 79, is a regular visitor to Europe and in recent years has recorded such albums as 'The Party Ain't Over' (2011) and 'Unfinished Business' (2012). And now, thanks to a technical glitch, Wanda's yodelling song of salvation has made it onto BBC Radio 4.