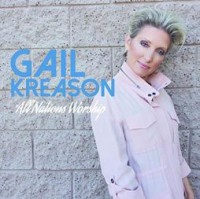 AMERICA'S Gail Kreason, who in 2014 was interviewed by Cross Rhythms when she spoke about her battle to overcome child abuse, her husband's murder and financial ruin, has released an album, 'All Nations Worship'. Featured on several tracks is Abigail Ogas, the worship leader at The Church LV, Las Vegas.

This CD actually touches the heart of almighty God! It reaches to the deepest part of worship, then takes you to the highest realms where you can feel the presence of God. An experience that you will long for over and over.

All Nations Worship
Gail's love for GOD and passion for nations is evident in every song. This CD draws you so close to our Father and it is evident that this music came from Him and the worship goes back to Him. And I believe that's why there is such a beautiful annointing on this CD. Thank you Gail die for putting to music the heart of God for His people.

The ministry of Gail Kreason exudes excellence in every endeavor and All Nations Worship is no exception.
Gail's love for GOD and heart for the nation's is captured on every song. This love and intimate relationship with GOD draws you into HIS throne room to lavish praise on Our King. This CD is pure worship at it's finest.

Breath of fresh air Christian music has been as long for. Always impressed by Gailâs lyrical and vocal talent. Her new album makes me feel OK skipping church :-)

Brilliantly refreshing Worship that glorifies the Lord with a powerful message: THE NATIONS. Gail has chosen marvelous new worship songs that do the both. A MUST CD for your collection,

Gailâs passion for worship can be felt throughout every song. The variety of songs are beautifully threaded together with the message of Jesus.

Absolutely Awesome music. Glorifies the Lord continuously. From the heart and so inspiring. The song Secret Place ushers me into His Presence every time I hear it.

When I listen to "All Nations Worship" CD I can see the loving and merciful heart of God the father who cares about every nation in the world. Those songs, that are fool of His love and hunger, inspire me to seek His face and pray for the outpouring of the Holy Spirit into every nation and every heart!

I am in love with this CD! Gail's ability to draw back the curtain and allow you to join her in God's presence is truly remarkable. While some Christian music tells us of God's great love for us, the music on this CD extends an invitation into total adoration and worship. A must have for those who seek a deeper walk with God.

This music is an opportunity to be transported directly to the throne room. Gail brings her heart for the nations to all of us in song. If you need encouragement or just want to join others in the body in lifting up his name, this is the CD for that.