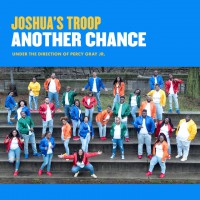 THE CHICAGO-based choir of teenagers and young adults from Chicago, Joshua's Troop, who in 2017 won a Stellar Award for their Youth Project Of The Year 'It's My Time', have their album 'Another Chance' released through New Haven Records. Read a press release, "Infusing contemporary hip-hop and spoken word elements with familiar gospel sensibilities, 'Another Chance' brings Joshua Troops message of redemption to today's generation of youth."