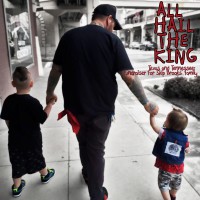 AMERICA'S Thumper Punk Records have released another project to help pay the medical and funeral costs of Californian pastor Skip Brooks. Read a press release, "In the course of releasing 'More Love More Power', the musical fundraiser to help pay medical and funeral expenses for Pastor Skip Brooks, a previously undisclosed recording was discovered. And now Thumper Punk Records is doubly honored to also release 'Texas And Tennessee: Fundraiser For Skip Brooks' family', which features seven unreleased studio tracks from All Hail The King, the worship band from Rise Above Ministries, in San Antonio, Texas. These tracks feature the same heavy worship sound as 'More Love More Power', but also add reggae and rocksteady influences to move both your feet and soul. All proceeds from the sale of this album will help support Skip and Jenni's two young sons Texas and Tennessee Brooks."