Buddy And Julie Miller make first album together for a decade 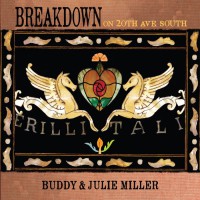 THE NASHVILLE-based husband and wife duo Buddy And Julie Miller have released their first album since 2009's 'Written In Chalk'. 'Breakdown On 20th Ave South' was recorded at Buddy's home studio. A review in Mojo magazine read, "These 12 great songs, all written by Julie, were recorded in their bedroom; due to her health problems. It was easier to sing from the bed which adds an intimacy. But if you think this means a fragile, literally laid-back Julie Miller, you'd be wrong. Even when harmonising with Buddy, her voice stands out, tough and triumphant."