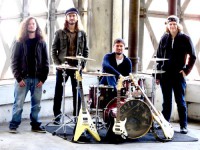 A NEW single by Nashville-based Rusty Shipp, their first new song for over two years, will be released on the 18th July. "Breaking Waves" is a track off the upcoming album, 'Liquid Exorcist'. Talking about their sound, Rusty Shipp's frontman Russ T Shipp said, "People have said we sound like Nirvana performing a Beach Boys song right after hearing Dark Side Of The Moon."