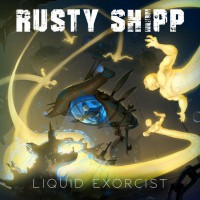 NASHVILLE-based Rusty Shipp are due to release their new album 'Liquid Exorcist' on November 7th. The album tells the story of sea mine terrorism in the 1940s, and already has three singles/videos. Lead singer Russ T Shipp said, "For this new album we're really drawing out the ingredients of our staple 'nautical rock 'n' roll' sound in bold and experimental ways to tell the story of 'Liquid Exorcist'. While progressing the experimental sounds of this new genre, we're also channelling our roots to give homage to our collective influences, such as doing a Chris Cornell tribute song and songs that are an obvious nod to '60s surf rock, prog rock and Nirvana-esque grunge pop."