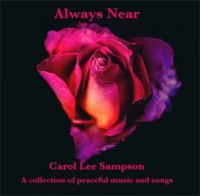 CRITICALLY praised singer/songwriter from Worcester, Carol Lee Sampson, has released a charity album, 'Always Near', aiming to raise Â£500 by Christmas for St Richard's Hospice in Worcester. Said Carol about the project, "This is mainly an instrumental, with a few of my songs interweaved. The tracks are a mixture of tunes that myself and husband Gareth have composed, and they were recorded live with some fab classical musicians who just 'busked' along in the Holy Spirit, resulting in many spontaneous moments which were amazing!"