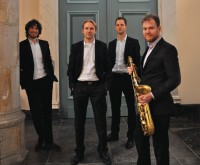 NETHERLANDS' popular Johnny & The Jazzsuits launched their second album 'Temporary Accommodation' in Amsterdam on the 15th October. It reached number six on the Dutch Gospel Top 10.