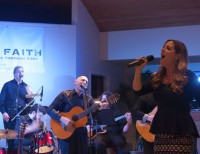 A BAND from Sparta, New Jersey, Circle Of Faith (featuring TK Pry) have released the album 'Always'. The group's music is described as "infusing different genres such as pop, rock, soul and country."