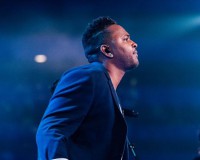 THE SINGER and songwriter William Matthews, who in 2011 released the album 'Hopes Anthem' through Bethel Music, has returned with an independent project, 'Kosmos'. The 18-track album features numerous guests including Amanda Cook, Trip Lee, Steffany Gretzinger, Lisa Gungor, Propaganda and others. Said Matthews, "This album depicts the outer limits of faith journeying through doubt, separation, wonder, awakening and justice. True spiritual music with no bounds. In 'Kosmos' I showcase the joy and tension within my own personal wrestling with spiritual deconstruction and reconstruction."