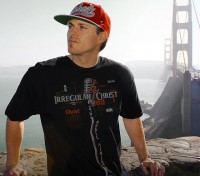 LAS VEGAS-based rapper Dusty Marshall has released a single, "Art Of The Enemy (ftg Davis Absolute, Jordan Copas and Krystal Marshall)". The track was produced by Spechouse and Mack11Beats, who have produced all three of Marshall's singles released this year. Read a press release, "'Art Of The Enemy' is hip-hop infused with a pop twist. This track speaks on the artist's downward spiral into isolation and sin, the results of neglecting his relationship with God and his own family in pursuit of his dreams as an artist."