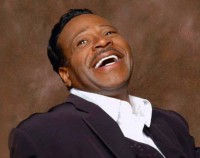 SONGWRITER, pianist, choir leader and singer Edwin Hawkins died of pancreatic cancer in his home in Pleasanton, California on 15th January, aged 74. As the leader at the Edwin Hawkins Singers he arranged a hymn "O Happy Day" which went on to become a multi-million selling single in 1969. Wrote Mark Allan Powell in the book Encyclopedia Of Contemporary Christian Music, "Edwin Hawkins will forever be remembered as the man whose choir scored a surprise hit with the hymn 'O Happy Day' in the year of Woodstock, previewing the recovery of traditional spirituality which would erupt in the Jesus movement revival two years later."

Edwin Reuben Hawkins was born on 18th August 1943. At the age of five he began playing piano for the Hawkins Family, a group which also included his brothers Daniel and Walter Hawkins and his sister-in-law Tramaine Hawkins. While a student at Berkeley, he and an associate, Betsy Watson, organised a choir for their church the Ephesian Church Of God In Christ. The small choir, originally known as the Northern California State Youth Choir, was recorded on a two track recorder in a San Francisco church as a fundraising project and 500 copies of an album were pressed which the group hoped to sell locally to finance a trip to Cleveland. However, when a DJ for a San Francisco radio station began playing the album's arrangement of "O Happy Day" the station's switchboard was jammed with enquiries requesting more information. The track and the album were picked up for national distribution by Buddah Records and the choir were renamed the Edwin Hawkins Singers. Quickly "O Happy Day" became an international pop hit and the Edwin Hawkins Singers were receiving accolades for bringing something new and fresh in pop music culture even though their sound was not much different from hundreds of other African-American choirs ministering in the USA. The actual lead singer on "O Happy Day", Dorothy Morrison, was signed to another mainstream label but her secular releases gained her little success.

A year later the Edwin Hawkins Singers scored another top 10 hit with "Lay Down (Candles In The Rain)" backing folk singer Melanie. The Singers performed at Madison Square Garden and Caesar's Palace, made numerous TV appearances and toured Europe although further albums like 'Children (Get Together)" and "I'd Like To Teach The World to Sing" weren't particularly successful. In 1976 Edwin Hawkins joined Oakland's Love Center church as choir director at the church pastored by his brother Walter. In 1978 Hawkins filmed the PBS TV special Edwin Hawkins: Gospel At The Symphony with the Oakland Symphony Orchestra. In the '80s Hawkins enjoyed gospel music hits with albums recorded with the Music and Arts Seminar Mass Choir. In the 1992 movie Leap Of Faith, Hawkins was the choir master for the gospel songs.