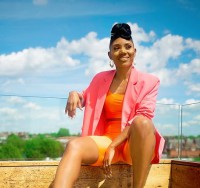 BRITISH gospel and acoustic soul singer Sharlene-Monique has released a single, "Diamond Woman". Sharlene rose to prominence as a member of The Kingdom Choir. Last year Sharlene released her debut EP, 'Destiny'. Talking about "Diamond Woman" Sharlene said, "I'm always inspired to write music that empowers women, and this song came from a real place of confidence and self-assurance. I wanted to write a song that was unapologetic about the person I'm becoming."