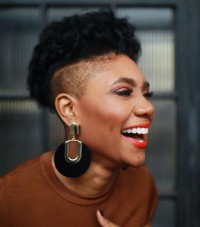 LONDON-based R&B/gospel singer Sharlene-Monique, whose debut single "You" has been streamed over 135,000 times on Spotify, has released her debut EP 'Destiny'. A single from it, "Awe & Wonder", was written by the singer with Jake Isaac. Read a press release, "The song is about finding the good and gold in the moment of nothingness that life sometimes presents."