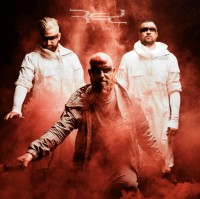 NASHVILLE-based heavy rockers Red have their sixth studio album 'Gone' released on 27th October. The first single "Stay Alive" is now being circulated to US radio. Read a press release, "'Gone' continues Red's honest exploration of darker themes and deep human struggles, with epic musical soundscapes that are raw, melodic, intense and emotional, all at the same time. With songs that explore Ecclesiastes-like questions such as, 'What is the meaning of life?' and 'What is my legacy when I'm gone?' Red draws additional creative inspiration using 'Artificial Intelligence' (A.I.) as a metaphor for the human experience." 'Gone' was produced by long-time producer Rob Graves. The project is also being released in a digital-only Deluxe Edition featuring 17 tracks.