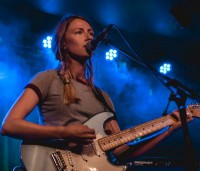 LONDON-based singer/songwriter Tina Boonstra will release the fourth and final song in her 'Underrated Animals' series when 7Core Music issue her single "Heart, Teeth, Hands". Tina recently contributed two live video performances to The Good Christian Music Blog YouTube channel, and her single "Find You" has now passed over half a million streams on Spotify.