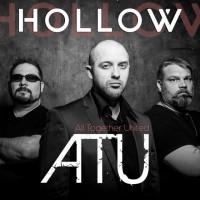 CREATIVE SOUL Records have released a single "Hollow" by Missouri-based rock band All Together United. The group had previously released an EP 'All Together United' in 2014 and an album 'Redemption' in 2015. The current lineup of the band is Matthew Ide (lead vocals), Ryan Greer (guitars) and drummer Chad Hampton who, after an accident serving in the army, is legally blind with limited vision in only one eye.