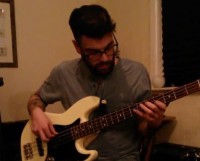 AN ACCRINGTON-based singer, guitarist, bassist and ukulele player John James Bruce has released his debut album 'Home'. The songsmith says his songs are influenced by "family, friends, faith and the big adventure we call life." 'Home' was recorded at Prorec Unlimited studios in Manchester.