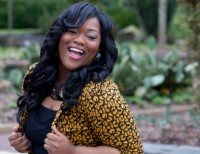 GOSPEL star Anthony Brown produced and wrote several songs for the second album by North Carolina's Ruth La'Ontra. The project 'I Got You', to be distributed in the UK through Authentic Media in October, features the title track which "borrows from the hit sounds of the '60s" and a cover of "In My Name", made famous by Rev Milton Brunson & The Thompson Community Singers.